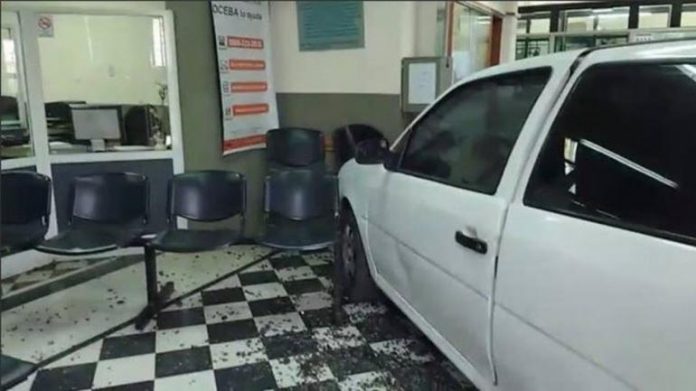 The workers of a power company were caught by surprise when a customer came back after arguing with some of them. The angry customer didn’t return on foot, she actually returned with a vehicle.

It all began when the customer, tired of her electricity being cut off, visited the offices of the company in San Pedro, Buenos Aires. The woman argued with some of the employees during her visit and left.

The woman visited the office on Tuesday morning, bringing some receipts to show that she had paid for the service. In her visit, she complained that her service was still having issues. The woman argued with some of the employees and then decided to leave.

She got on her Volkswagen Gol car and drove on the sidewalk and into the glass entrance of the office. She was driving slow but the speed was enough to get her through the entrance and into part of the office.

An official of the company did tell local media that some of the employees suffered minor injuries from the glass. The official said that the employees were shocked and that the person had entered over an issue with the electricity. He added that she made some threats, left the location and then entered with her car.

The woman had complained of power cuts in the home she rented before driving her car into the office. She was arrested shortly after the incident and authorities said that she arrived in a state of shock. The crash left serious damage to the office, which lost its glass entrance and most of the chairs for the customers.

The employees were shocked by the woman’s return after the argument. She was angry when she left the office but they never thought she would drive her car into the office. Infobae reports that the woman slowly drove to the entrance and then parked in front of the glass. She then drove straight through, knocking down and breaking the glass, chairs and other objects in there.