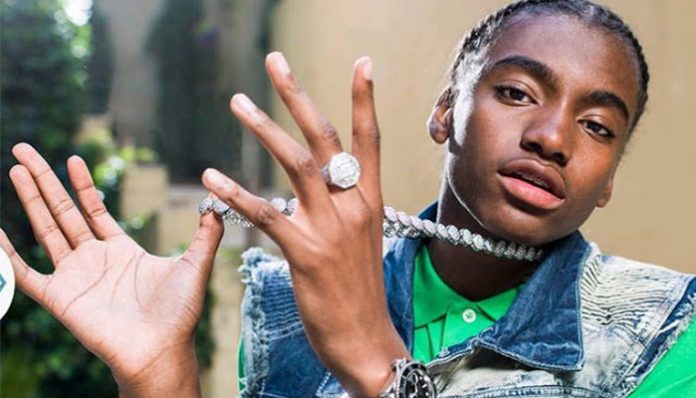 A Los Angeles rapper, Mani has been putting together songs since he was twelve years old. Some of his most popular tracks include Wavy, Walk In, What Do You Know, and They Know Me, all of which were played hundreds of thousands of times on streaming sites such as SoundCloud.

In 2016, his popularity rose after took part in the music reality show, The Rap Game. An audience favorite, he eventually went on to win the second season. As the champion, he was later given a recording contract with Jermaine Dupri’s record label, So So Def Recordings.

How’s the 18-year-old rap artist doing for himself nowadays? What has he been up to since winning The Rap Game? How much has he earned from his rap career so far? Unfortunately, information on Mani’s net worth is not yet available. In the meantime, however, let’s take a look at some of his accomplishments.

How did Mani Make His Money & Wealth?

Born on April 25, 2000, in Los Angeles, California, Mani has been fond of music ever since he was a child. The son of Lacreshia Hoy, a former member of the music group Queens of Compton, he began to spend time at the recording studio when he was just six years old. Inspired by Snoop Dogg, Michael Jackson, Bone Thugs-n-Harmony, and Bow Wow, he eventually began to record his own songs in his early teens.

Close to his parents, his father takes care of his career’s creative aspects, while his mother focuses on the business matters. Over the past few years, the rapper has released a number of tracks including They Know Me, What Do You Know, Wavy, and Earn It, most of which have racked up hundreds of thousands of streams on SoundCloud.

Last fall, he also put together his first digital album titled, Mani. An eight-track project, it consisted of the songs Yung Millionaire, Better, Pick Up the Bag, Wavy, Walk In, They Know Me, One Shot, and What Do You Know. For those who are interested, the album is available for purchase on iTunes.

As you can probably expect, his rap career has proved to be rewarding over the past few years. In 2016, his popularity also received a boost after he appeared on the reality competition series, The Rap Game. Hosted by none other than Jermaine Dupri, the show followed several rappers as they competed for a chance to sign with his music label, So So Recordings.

After many weeks of competition, Mani was crowned as the winner in September 2016. With that, his presence in the rap scene grew further- today, he has more than 430,000 followers on Instagram alone. For those who’d like to keep up to date with his latest releases, it might be a good idea to follow his SoundCloud account here.

With time, assuming that he continues to churn out new hits, it’s likely that his popularity will continue to increase. As it does, he’ll also gain new opportunities (e.g. concerts, performances, tours) to rake in the cash.

Though not much is known about Mani’s private life, he is single as far as we know.

Does Mani Have Any Children?

No, Mani does not have any children that we know of.

Did Mani Go to College?

Unfortunately, not much information is available on Mani’s education background at this time.

What is Mani Famous For?

Mani rose to fame after appearing on and winning Jermaine Dupri’s music reality show, The Rap Game in 2016. Since then, he has released a number of projects- including his digital album, Mani, which recently came out last fall.

Where Does Mani Live now? Pictures of Mani’s House

The last that we’d checked, Mani lived in Los Angeles. Unfortunately, we do not have any further information on his location at this time.

What Kind of Car Does Mani Drive?

Details on Mani’s vehicle are not available.

How Much Money Did Mani Make Last Year?

At this time, we do not have any information on Mani’s annual salary.

As mentioned earlier, the rap artist recently came out with a digital album titled, Mani, which is available for purchase on the Apple Store. Some highlights from the project include Pick Up the Bag, Yung Millionaire, and One Shot.

Want to keep up with the rapper’s activities? If so, how about following him on social media? For instance, Mani’s active on Twitter and Instagram at @DaRealMani_. For his official music videos and more, be sure to check out his official YouTube channel here.