BJ Novak is an actor who is best known for his role as Ryan Howard in the hit television series The Office. He is also an accomplished stand-up comedian and a successful author with several best-selling books under his belt.

Read on and find out more about Novak’s life, from how he became famous to what he’s doing now.

How did BJ Novak make his money & wealth?

Benjamin Joseph “BJ” Novak was born in Newton, Massachusetts, on July 31, 1979. His father is renowned ghostwriter William Novak who has ghostwritten numerous memoirs for well-known personalities such as Magic Johnson and Nancy Reagan. Novak attended Solomon Schechter Day School of Greater Boston during his elementary and middle school years, and for high school, he went to Newton South High School where he was schoolmates with The Office co-star John Krasinski.

Novak pursued an English and Spanish Literature degree in Harvard University. During his studies there, he was a member of the Hasty Pudding Club and humor publication Harvard Lampoon, and his experiences on the latter helped define his comedic path. Also, in collaboration with his fellow student and future actor B.J. Averell, the two started the variety show The B.J. Show 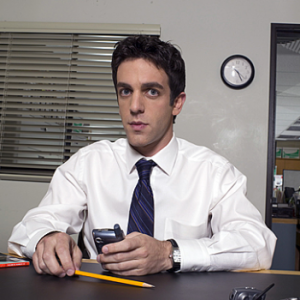 After graduating from Harvard in 2001, Novak flew to Los Angeles where he worked as a comedian in different clubs, and his efforts earned him a spot at the “Ten Comedians To Watch” list of Variety magazine in 2003. He also appeared on shows such as Late Night with Conan O’Brien, Punk’d, and Premium Blend. During his stint as a stand-up comedian, Novak’s talents caught the eye of producer Greg Daniels which led to him being the first actor aboard The Office. Novak filled a dual role of being an actor and writer and, as the series progressed, he became an executive producer in the seventh season and directed two episodes.

Novak also made appearances in a variety of films like Knocked Up, Inglorious Basterds, Reign Over Me, and The Amazing Spider-Man 2. In 2014, his book One More Thing: Stories and Other Stories was released which stayed on the Hardcover Fiction Bestsellers List of The New York Times for six weeks. Additionally, during the same year, The Book With No Pictures was published in September which spent more than a year on the Picture Books list of NYT. In 2015, Novak and Dev Flaherty released a mobile app called The List App which was shut down two years later due to insufficient growth.

This year, Novak was spotted with Mindy Kaling at the red carpet of Vanity Fair’s Oscars After-Party. He also appeared in the episode “Oh Nathaniel, It’s On!” of comedy series Crazy Ex-Girlfriend where he portrayed a satire of himself.

No. Novak is currently single.

He was involved in an on-off relationship with The Office co-star Mindy Kaling, much like their on-screen counterparts. The two broke up but remained in touch up to this day, with both of them acknowledging that they have a good yet “complicated” friendship. Recently, Novak congratulated Kaling for her role at A Wrinkle in Time and sent her congratulatory flowers in April for her upcoming film Late Night. Novak also appeared in a few episodes of Kaling’s comedy series The Mindy Project as Jamie.

In 2016, Novak dated Instagram model Ceilidh Garten, but it seems the two have broken up.

Novak was spotted driving a black Audi A5.

In 2016, Novak and Penguin Young Readers donated 10,000 copies of his book The Book with No Pictures to First Book.

Novak has received three awards and numerous nominations for his work at The Office.

Novak won the “Outstanding Performance by an Ensemble in a Comedy Series” award from the Screen Actors Guild Awards in 2006 and 2007 along with his co-stars. They also bagged the ”Comedy Series” accolade in the 2006 Writers Guild of America Awards.