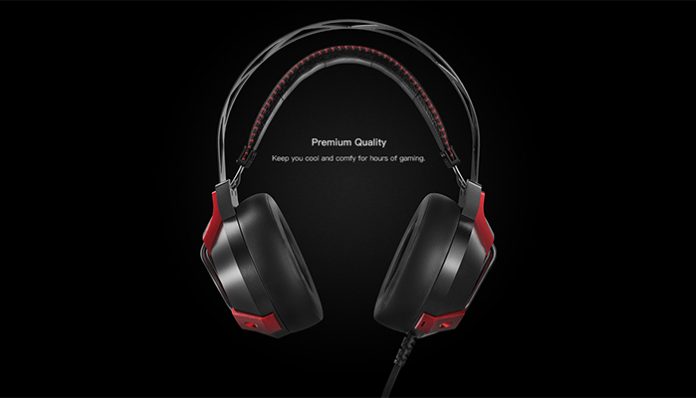 When it comes to gaming, sound can’t be neglected. As important as the visuals themselves, the audio allows for you to fully immerse in the game. After all, it’s hard to put yourself into the virtual world when your surroundings are silent- whether you’re playing an RPG, or a first person shooter.

Let’s talk about headphones- if you’ve ever watched professionals play on sites such as YouTube, you’ve probably noticed that they all have headsets.

Why Wear a Headset?

Headsets are almost essential when it comes to immersing yourself in the full, gaming experience. Not only do they offer greater sound quality (compared to what you’d get from a TV or computer), but they’re also useful at cancelling ambient sounds- that way, you can fully focus on your game!

You can also think of it this way- the alternative to not using a headset is to use your television’s built in speaker. Unless you have a surround sound system or something similar, the audio from your device will be shoddy at best. To make things worse, the people around you will probably not appreciate your game as much as you- for them, it’s just loud, unwanted sound.

As you can probably expect, gaming headsets- like most electronics, are manufactured by a number of different companies around the world. Looking for a good, economic option? If so, we’ve got you covered. On this page, we will be taking a look at the Over-Ear Stereo USB Gaming Headset by Dodocool. What are some of its pros and cons? How does it compare with some of the other headphones out there in the market? Let’s have a look.

A Hong Kong-based company, Dodocool was founded as a consumer electronics brand in 2011. Not only do they offer world-class earphones, but they also manufacture other products such as mobile accessories, all of which are carefully tested and examined before the packaging process.

While it’s true that they’re not as well known as other brands, at least in North America, the quality of their products are generally pretty solid. In fact, the company welcomes feedback- both positive and negative, from customers, so that they’re able to improve both their products and services.

Reinforced with lightweight steel, the Dodocool Gaming Headset delivers nothing but outstanding sound for an immersive gaming experience. Featuring PU leather earmuffs, it can easily be worn comfortably for hours on end. Designed for daily use, it won’t be coming apart anytime soon!

What Gaming Consoles Can I Use it For?

Compatible with most modern gaming consoles, the Dodocool gaming headset can be used with PS4, PS vita, PSP, Xbox One, and Nintendo Switch, etc. Of course, you can also plug it into your computer!

Immerse yourself into the next level of gaming with its 360-degree sound field. With this, you’ll easily be able to pinpoint exactly where you are in the game with things such as environmental cues and enemy location.

Built to last, it features a reinforced steel frame that can easily withstand daily use. Not only that, but it comes with an adjustable PU leather pad for a comfortable, personalized fit. Incredibly soft, the ear cushions will allow for hours of comfy gaming.

The headset comes with a 7.2ft cable- simply plug it into your computer and play! There’s no need to for charging.

Note: The Virtual 7.1 Surround Sound software for the headset can be downloaded from the product’s official website.

With its ability to effectively block out ambient noise, you’ll have no problem focusing on what’s important- the game in front of your screen.

The volume of the headset can be easily adjusted via the dial plate on the right side.

For your convenience, we’ve put together a list of some of the headset’s advantages and disadvantages. Hopefully, you’ll be able to get a better idea of the product after going through some of the points.

What do Users Have To Say About the Headset on Amazon?

If you’ve ever used Amazon, then you’re probably familiar with reading through pages of user reviews. After all, you want to make sure that the item that you’re buying is actually good.

As mentioned earlier, the Dodocool USB Gaming Headset can be purchased via Amazon. What does this mean? That many users have already shared their experience with the gadget! What have they said about the headphones? We’ve summarized some of the main points that we’ve found in the reviews below.

All in all, the general consensus seems to be overwhelmingly positive. If anything, everyone agreed that you get bang for your buck- that despite it’s low cost, it produces high quality 7.1 surround sound.

Were there aspects that users weren’t as satisfied with? Yes, some of these include:

As you can see, the positives greatly outweigh the negatives.

How does the headset compare to some of the more expensive options out there on the market? In our case, how true is “you get what you paid for”? We’ve compiled a list below of some of the things that others have brought up about the Dodocool headset when compared to some of the other brands.

Considering all that it offers- the Dodocool USB Gaming Headset is definitely not too shabby- especially since it sells on Amazon! When compared to some of the more expensive brands (e.g. Sennheiser, Sony, etc.), the difference in sound quality was not nearly as big as we’d thought. If anything, its 7.1 surround sound is pretty top notch!

Having said that, one thing to keep in mind is that it does come with a cord (it’s a USB gaming headset after all). If you’re the type of gamer that would prefer something that would give you a bit more freedom (i.e. wireless headphones), then you might want to go for a different option. If you don’t mind the “hassle” of there being a cable running through it and your computer/console however, then it’s perfect.

So, Should I Get the Dodocool USB Gaming Headset?

Hopefully, you were able to get a better idea of the Dodocool Headset after reading our blurb on it above. For those who might still be on the fence however, perhaps consider the following questions:

If you’ve answered yes to most of the questions, chances are, the Dodocool USB Gaming Headset might be a good fit for you.

Where Can I Buy the Dodocool USB Gaming Headset?

Unfortunately, the Dodocool USB Gaming Headset is currently only available for purchase on Amazon (even if you go onto its official website, it will re-direct you to Amazon).

While not being able to buy it at a physical retailer means that you won’t be able to get a “feel” for the item beforehand, buying it through Amazon does mean that you will be able to enjoy free two day shipping (assuming that you’ve subscribed to Amazon Prime). Not only that, but if at any point you change your mind, or are unsatisfied with the product, you can easily send it back to Amazon for a full refund- completely hassle-free!

What’s there to lose? Why not go ahead and give it a try? You might just be surprised as what it’s capable of when it comes to sound quality.