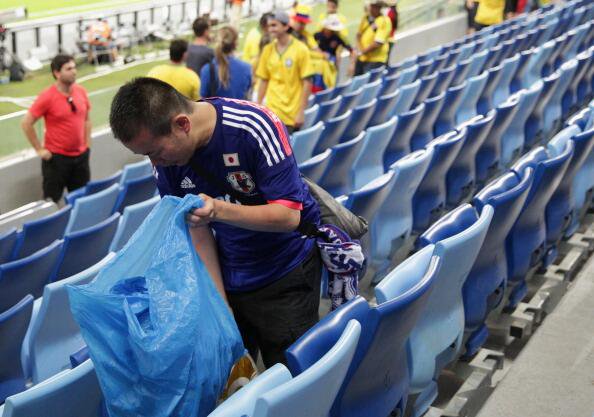 Japan’s team left with a huge victory against Colombia on Tuesday but what came after has caught the attention of people around the world. Stadiums are usually a mess after any event but Japanese fans made sure that the stadium staff didn’t have much to worry about.

The fans cleaned up the areas in which they were seated, picking up everything from plastic cups to wrappers. In one video posted on social media, a Colombian fan is seen congratulating Japanese fans, who are busy cleaning the stadium.

The fans appear to have brought their own trash bags to clean after the game. The videos have gone viral but it is not the first time that Japanese fans do something like this. At the previous World Cup, held in Brazil, they were also seen cleaning the stadium after the games.

Before that happened, Japan’s national team earned a huge result against Colombia, which played most of the match with ten players after an early red card. The result gave Japan three points and put them closer to advancing into the next round. Japan will play Senegal and then Poland for its last group stage match.

Football journalist Scott McIntyre told the BBC that this is just not part of the football culture but part of Japanese culture as well. He explains that an important aspect of Japanese society is making sure that everything is clean. McIntyre explains that Japanese people will also tell others to clean up if they see that something is being left on the ground.

Japan’s next match is against Senegal, a team that is coming off a big victory against Poland. Both teams have three points and a win would put them into the next round.