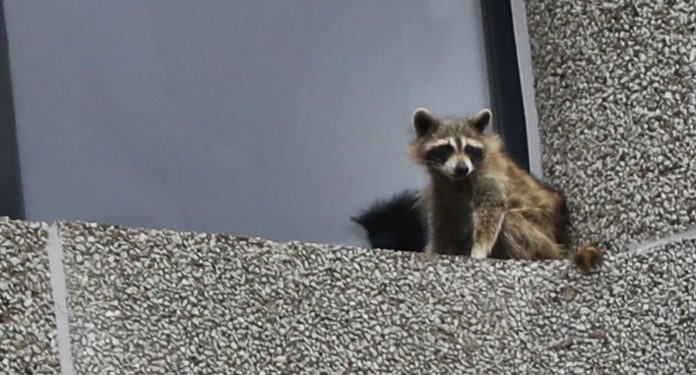 A raccoon has been safely rescued but not before catching the attention of thousands of social media users around the world. The raccoon was spotted scaling a 23-floor building in the city of St Paul.

The raccoon’s dangerous climb spread all over social media. The animal was such a popular topic that it trended for a while on Twitter. The raccoon was also the center of local media news.

At one point, crowds gathered at the building to watch the raccoon. He climbed the building for hours and reached the roof at 3:00 a.m. Rescue workers had placed cat food at the roof. The food was placed in a trap, so it wouldn’t continue walking around the roof and risking its life.

Evan Frost, a journalist with Minnesota Public Radio (MPR), told the BBC that they went out there at about 8:30 on Tuesday morning and noticed that it was a raccoon. He explained that two workers in the building used long planks to make a ladder but the rescue attempt ended up scaring the animal.

The raccoon began scaling the building after the rescue attempt and did that for most of Tuesday. It also took breaks during the climb, napping on the ledges. A picture from MPR News shows him taking a nap right next to a window.

The raccoon also went up and down the building’s floors, worrying the crowd watching outside. The animal made its way down for a bit before going back up and reaching the roof.

Raccoons are common in Minnesota but they don’t often make news for scaling buildings in the area. The UBS Plaza Twitter account confirmed that the animal was in the trap at 8:29 a.m.

The raccoon’s dangerous climb has made him super popular on social media. People have already made accounts in his name while others have posted fan-art and created toys. James Gunn, who directed the two Guardians of the Galaxy films, offered to donate $1,000 to charity for the person who was able to rescue the raccoon.

The rescue was a little difficult for emergency teams as the windows of the building were sealed. Fire officials also explained that a human rescue was too dangerous. The only solution was to wait and watch the animal climb the 23-floor building. The raccoon was picked up from the roof by local Wildlife Management.