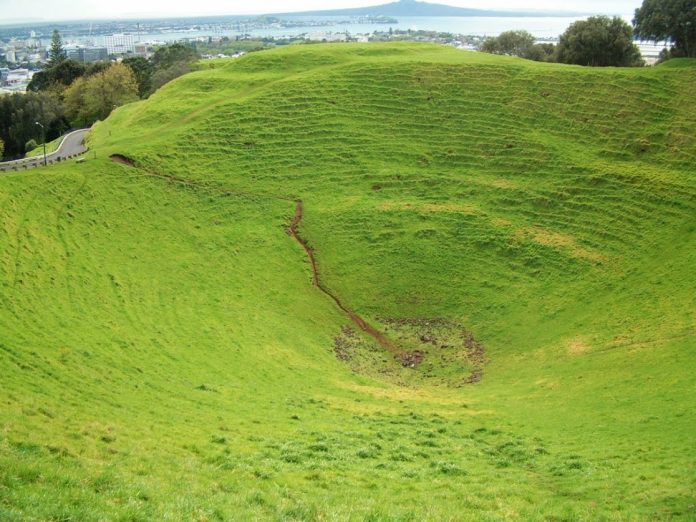 A bicycle from bike sharing service OnzO has been found at the bottom of a crater of a volcano. The New Zealand Herald reports that the bike was spotted by a resident who was out for a walk.

A spokesperson for the bike sharing service responded to the discovery, saying that they discourage people from leaving bicycles where they shouldn’t be.

The Mount Eden volcano is the highest volcano in Auckland and it last erupted about 15,000 years ago. The eruption left a deep crater in the area. The volcano, also known as Maungawhau, is located just 5 km (3 miles) from downtown Auckland.

In recent years, several bike sharing services have had the same problem but this one is probably the most unlikely place so far. A photographer from the New Zealand Herald said that the area was slippery and muddy and it would have taken a lot of effort to leave the bike there and get back up.

The bike sharing service has had several problems with people leaving bikes in places where they shouldn’t be. In recent months, local media has reported that staff have had a difficult time recovering bicycles. Some of the bikes have been left in difficult to reach places or have been put for sale.

OnzO works just like many other bike sharing services across the world. The bikes can be rented through an app and left in other areas that are included in the service. Bruce Qin, one of the partners at OnzO, has said in the past that the service has run into some problems. He explained that people leave the bikes in difficult to reach places or have kept them.

OnzO is not the only bike sharing service that has this problem. In recent years, bike sharing services such as Ofo, Mobike and GoBee Bike have all lost bikes to theft or vandalism. A few months ago, GoBee Bike decided to shut down its operations in France, saying it was due to destruction of its bikes. The bike sharing company had already left a few European cities before that announcement. Yesterday, reports mentioned that bike theft is a big problem for Mobike in Mexico. The director of Mobike in Mexico revealed that the company is working with police to recover the bicycles. The company currently has 500 bikes in Mexico City and is waiting for permission to add more.

Jan 10, 2022
The NFL has posted the schedule for the start of the playoffs. The race to the Super Bowl begins with the wild card weekend,...