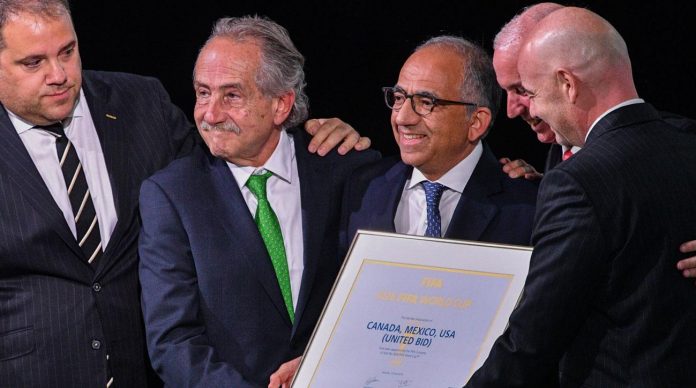 FIFA members voted on the host of the 2026 World Cup and the joint bid from the US, Canada and Mexico was the winner. The 2026 joint bid received more than half of the votes, winning 134 to 65.

The US bid was competing against Morocco, which had received some support weeks before the vote. The North African country has now submitted five bids to be a World Cup host. Reports said the country came close to winning it for the 2010 edition, which was hosted by South Africa.

The 2026 edition will be the first to feature 48 teams in the group stage. The tournament currently features 32 teams. The expansion was approved early last year and changes a number of things, including the amount of teams competing in one group and the amount of matches played in the tournament. Two of the three teams from each group will also advance.

The 68th FIFA Congress was held earlier today in Moscow. 200 members were there to vote on the host of the 2026 edition. The winning bid needed a majority of 104 but the joint bid received 134.

The countries participating in the bids were not allowed to vote. US territories such as Puerto Rico, Guam and US Virgin Islands also didn’t vote. Ghana was absent from the event after its government recently said that it had disbanded its football association.

The two bids made a presentation before the FIFA members voted to select the host of the 2026 edition. The US, Mexico and Canada bid is the first joint bid since 2002. In that edition, Japan and South Korea each hosted World Cup games. It is the first time that the World Cup will have three hosts.

The US, Mexico and Canada have already announced the amount of games that each country will host. The US will host 60 games while Canada and Mexico will host ten games each. There will be 16 host cities, with ten of them being in the US. The six others will be split between Canada and Mexico.

Reports say there are plans to hold the final at MetLife Stadium, which opened in 2010 and serves as the home stadium for the New York Giants and New York Jets.