The World Cup is now underway after a long wait of four years. In just two days, we have seen entertaining matches such as Spain – Portugal and Russia – Saudi Arabia. The tournament is just getting started and Sunday promises to be one of the best days as the current champion and other favorites will play. Here are the results, upcoming matches and more about the World Cup 2018: 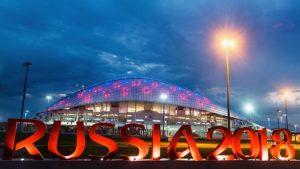 The World Cup began with a huge game by Russia. The hosts of the tournament scored five goals against Saudi Arabia. Russia will face Egypt on June 19 while Saudi Arabia will face Uruguay on June 20.

Egypt played its first game without its star Mohamed Salah, who suffered an injury during the Champions League final against Real Madrid. The team still managed to keep the game close but it ended in a heartbreak when the South American nation scored in the last few seconds of the game.

Iran is now at the top of its group after winning with a late own goal by Morocco. The win was Iran’s first at a World Cup in 20 years. Iran will face Spain on June 20 while Morocco will go up against Portugal that same day.

Portugal vs. Spain is easily one of the best games of the World Cup so far. The Euro 2016 champions took the lead after a penalty from Cristiano Ronaldo. Spain quickly tied the game and took the lead on the second half. With just a few minutes remaining, Ronaldo scored an amazing free kick. The goal, third from Ronaldo, earned Portugal one point in the group.

France earned three points by barely beating Australia 2 – 1. The game included a late goal from Paul Pogba and the first VAR-assisted penalty. France will face Peru on June 21 and Denmark on June 26.

Argentina disappointed in its first game with a draw against Iceland. The South American nation took the lead early on but Iceland fought back a few minutes later and scored to make things 1 – 1. Argentina controlled the ball for most of the match but Iceland had a few chances to take the three points. Things are now looking complicated for Argentina with Nigeria and Croatia coming up.

Denmark left with the three points after defeating Peru 1 – 0. Peru had several chances throughout the match, including a missed penalty that would have given them the lead. The South American nation brought in its top scorer Guerrero late in the match. He had a few chances as well but Denmark held on to take the top of the group stage.

Croatia is now at the top of the group after a 2 – 0 win against Nigeria. Things look quite interesting for matchday 2 as Croatia will face Argentina.

The World Cup has been really entertaining so far but tomorrow promises to be one of the best for the tournament. The 2014 World Cup Champions Germany will play Mexico. Brazil will play Switzerland while Serbia will play Costa Rica.

Iran is currently at the top of Group B, which has Spain and Portugal. The win came off a late own goal from Morocco but it puts Iran in a great spot to qualify and leave one of the two favorites out. Iran does have the tough task of leaving with a good result against Portugal or Spain.

Iceland left with a draw against Argentina but the result was a win for many. Argentina was the favorite for this match but Iceland showed that they have not lost what they had going at the Euro 2016 tournament.

Russia opened with a few doubts on its game but the huge 5 – 0 win against Saudi Arabia put the host in a good position to qualify for the next round. Russia does have a difficult task ahead with Uruguay and Egypt as its next opponents.

The match between Egypt and Uruguay drew complaints from Russian fans who took social media to demand why there were rows of pitch-side seats empty. Residents also complained that they had to pay nearly a third of an average monthly salary to get less better seats.

FIFA said the game had an attendance of 27,015 but the stadium has a capacity of a little bit over 33,000. A spokesman for FIFA said the empty seats were mainly no shows. Some fans complained that the tickets they bought were not really what they thought while one said he bought a seat that did not exist and had to talk to police so they could let him in.