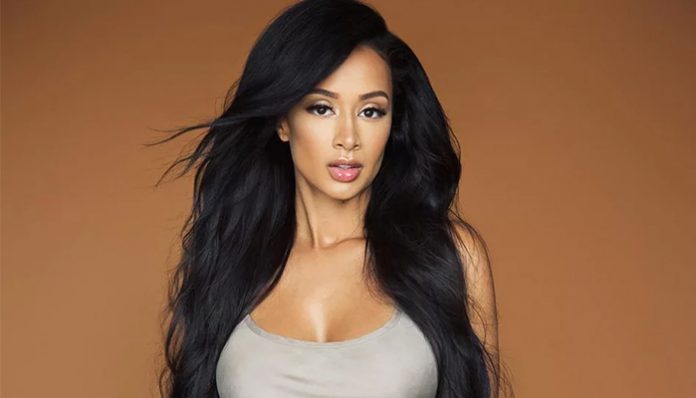 Draya Michele initially came into the public eye in the early 2010’s, after it was made known that she was dating Chris Brown. A year later, she joined the cast of VH1’s reality series, Basket Wives LA, which helped to boost her notoriety further.

In addition to reality television, she has also acted on a number of occasions. In 2015, she made her acting debut in the TV film, Will to Love, which saw her working alongside actors Marques Houston and Keshia Knight Pulliam. Some of her other movie credits include The Perfect Match, Bring Out the Lady, and We Belong Together.

How well-off is the mother of two? How lucrative is her television career? Is she involved with any other endeavors? According to various sites, Draya Michele has amassed a net worth of $600,000 as of 2018. How much of this came from her work on reality TV? Let’s have a look.

How did Draya Michele Make Her Money & Wealth?

Born on January 23, 1985, in Reading, Pennsylvania, Draya Michele is the daughter of an Italian mother and an African-American father. Unfortunately, not much is known about her early life at this time. What we do know, however, is that she launched a showbiz career by appearing in music videos for artists such as Jay-Z, Nicki Minaj, and Kanye West.

In the end, however, it wasn’t until she started to date Chris Brown in the early 2010’s that she started to gain attention. As one thing led to another, she eventually found herself cast in VH1’s reality series, Basketball Wives LA in 2011. Her television debut, she ultimately appeared in seven episodes, during which her popularity rose. Unfortunately, it’s not known how much she was paid for the role at this time.

A few spread out TV appearances later, she made her acting debut in 2015. Cast as one of the main protagonists in the film Will to Love, she had the opportunity to work with Marques Houston and Keshia Knight Pulliam.

A year later, she played a supporting role in the romance comedy The Perfect Match, which starred Terrence Jenkins and Cassie Ventura. From there, she joined the main cast of Bring Out the Lady, a drama film which came out in August 2016. Since then, she has appeared in a few additional titles including True to the Game, We Belong Together and All In.

Going back to our original question, there’s no doubt that she earns a significant amount from her work on television—both from acting and reality TV. In addition to that, however, Michele also has a few business ventures to her name. For instance, she released her own line of swimwear called “Mint Swim” in 2011. Not only that, but she also has two other clothing lines called “Beige & Coco” and “Fine Ass Girls”, the former of which was launched in 2016. For those who are interested in the product, you can browse the catalog on their official website here.

While Draya Michele isn’t married, she has been engaged to Orlando Scandrick (whom she met while filming Basketball Wives LA) since 2015.

Does Draya Michele Have Any Children?

Did Draya Michele Go to College?

Unfortunately, not much has been disclosed about Draya Michele’s education background. As far as we know, she did not go to college.

What is Draya Michele Famous For?

Draya Michele initially gained attention as the girlfriend of Chris Brown in the early 2010’s. From there, her popularity rose further after she was cast in VH1’s reality series, Basketball Wives LA.

According to her Twitter bio, the television personality currently resides in Los Angeles. We do not have any additional information at this time.

What Kind of Car Does Draya Michele Drive?

How Much Money Did Draya Michele Make Last Year?

At this time, we do not have any information on Draya Michele’s 2017 take-home income.

As mentioned earlier, Draya Michele has worked on a few films over the past couple of years—these include True to the Game, We Belong Together, and All In, the last of which will be released sometime later this year. In terms of reality TV, she last appeared in the special A Brighter Future for Children in 2017.

Want to know what she’s up to? If so, why not follow her on Twitter at @DrayaMichele? Not only that, but she’s also active on Instagram at @DrayaMichele. While you’re at it, don’t forget to check out her official Facebook fan page as well here.