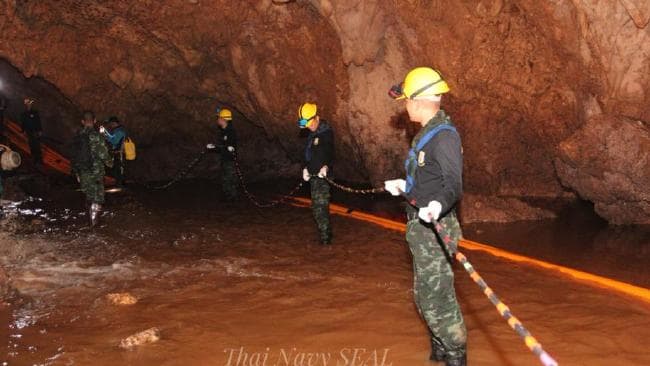 The rescue operation to free the group that’s been trapped in a cave in northern Thailand for over two weeks has been paused for at least ten hours. Rescue teams have made the pause to replace the air tanks.

The pause comes after rescue teams freed four of the boys. Chiang Rai Governor Narongsak Osottanakorm recently said the next phase of the rescue operation would start on Monday morning.

The boys and their soccer coach have been in the cave for over two weeks. The rescue operation began shortly after they went missing but it took teams days to find the group. The group was found earlier this week and teams have been focusing on getting them out ever since.

The rescue operation has been joined by several expert divers from Thailand and other countries. The journey out of the cave takes divers and the group through some flooded areas and places that are too small for scuba tanks. Climbing gear is also needed to reach the area where the divers have their base. The group can walk to the entrance after that point.

Four boys were recently brought out of the cave and transported to a hospital. The wait for the other part of the group continues as teams have to replace the air tanks. Each boy is being accompanied by two divers. They guide the boys through the passageways and carry their air supply.

The operation began just hours after the group was reported missing but the heavy rains slowed down the search. Teams had to bring in industrial pumps for the operation since parts of the cave were flooded by the rains. The attempts were not successful early on but there has been a break from the rain.

The twelve boys and their coach got trapped in the cave over two weeks ago. The group was found by British divers after nearly ten days. Reports say the soccer team and their coach had visited the cave a few years ago.

The group has received food, blankets and medical treatment as they wait for their rescue. Officials first thought the rescue would take months but the rainy season has changed plans. The governor recently said that water levels were at their lowest. Teams are speeding up the process so that rain does not complicate the rescue. The operation is set to resume later.