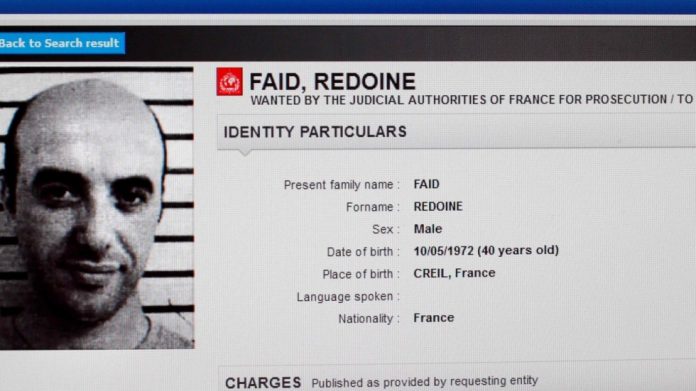 France’s most wanted criminal has evaded police after being spotted near Paris. Police say Redoine Faid was spotted on Tuesday afternoon but fled the scene shortly after. Faid broke out of prison on July 1 and has been on the run since.

Faid fled the scene after being spotted and abandoned a car with explosives. The car, which had fake license plates, was left abandoned at a shopping center.

Faid was serving a 25 year sentence for a failed 2010 robbery in which a police officer lost his life. On July 1, he escaped prison with the help of armed accomplices. They escaped the area after hijacking a helicopter.

Spotted In a Car

Faid is no stranger to escaping from prison, five years ago he escaped prison after taking four guards hostages. He got out of the prison by using explosives to remove the doors. Faid was on the run for six weeks.

French authorities say he was spotted in a car. Faid was one of two people in the car watching a service station, AFP reports. Authorities approached the car to carry out a check and they fled.

Authorities later found a Renault car with explosives parked in an underground parking. The abandoned car forced authorities to close the area and bring in bomb experts. Authorities have been searching for Faid since his escape earlier this month.

The sighting on Tuesday was the first time authorities had seen him since his escape. Nearly 3,000 police officers have joined the search for Faid.

Faid has escaped prison two times and has been on the run for more than three weeks now. He grew up in Paris and is a well-known criminal in the country.

Faid is said to be a fan of heist films such as Heat. He once told a French magazine that he had watched that film in theater seven times. He also said that he watched the DVD of that movie about a hundred times.

Police say that in the 90s, Faid ran a gang involved in armed robbery and other crimes. He later claimed that he was done with crime but he was later accused of the failed robbery. One of the prison supervisors recently said that he never had problems with guards but that he never lost the idea of escaping.