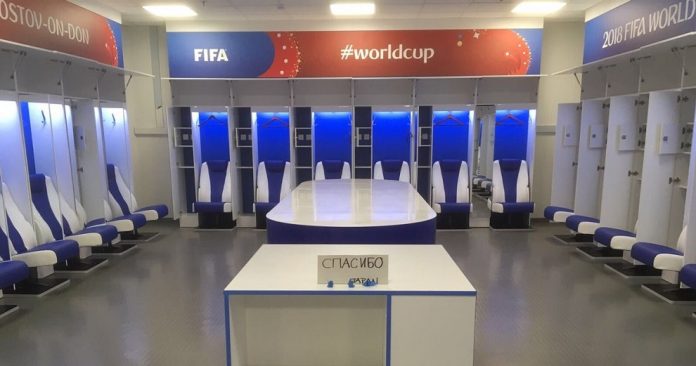 Fans of Japan’s national football team recently went viral after videos and pictures showed them cleaning the stadium after the game. Now, Japan’s team has done the same after its elimination from the World Cup.

Japan’s national team suffered a heartbreaking loss against Belgium just a few days ago. The team was up 2 – 0 in the second half before Belgium fought back and tied the game with just a few minutes to go. Belgium would score again after an impressive counter attack in the last few seconds of the game.

The loss left Japan out of the tournament but that wasn’t enough to stop the team from doing one last thing in Russia. After the game, the national team cleaned the locker room, leaving it as if it had never been used. The national team also left a paper saying Thank You in Russian.

The pictures taken after the team left show a clean locker room. It almost looks like the team didn’t use the locker room at all. Their act comes just days after fans cleaned the stadium in which Japan played its first match of the group stage.

Cleaning stadiums after the game is nothing new for Japanese people. They also did the same during the 2014 World Cup. It always goes viral though as it is something that other fans don’t usually do. After Japan’s win against Colombia, many Japanese fans were seen carrying trash bags and picking up cups and bags left in the stands.

Fans of Senegal were also seen doing the same after their game. Uruguay fans later decided to follow Japanese fans and clean the stadium after the match against Saudi Arabia. In one video, Uruguay fans are seen cleaning the stands after the game. The person taking the video explains that people may say that they are copying Japanese fans and they are right. He adds that they are not stealing the idea, just learning from them.

Experts explain that this is part of the Japanese culture and that people are thought at an early age to clean. The acts always catch people by surprise though and some have already decided to follow.

The World Cup returns on Friday with quarter-final games between France – Uruguay and Brazil – Belgium. The two other games between Sweden – England and Russia – Croatia will be on Saturday.