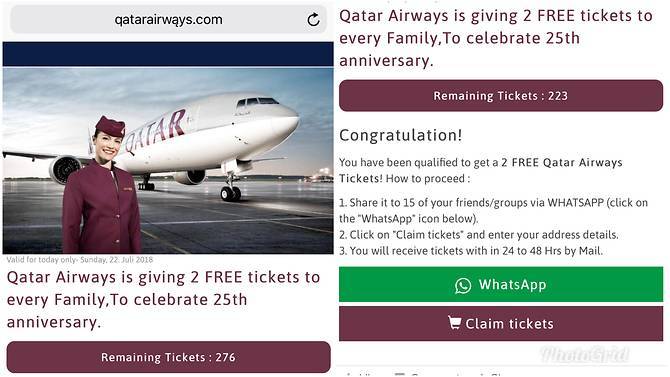 A phishing scam that offers free Qatar Airways tickets has not disappeared from messaging service WhatsApp. The fake offer is still circulating on the messaging service even though the airline has warned people about it.

The airline warned about the scam last month but some users have received messages about the fake offer through the messaging service. The message being sent to users says that the airline giving two free tickets to every family as part of its 25th anniversary.

The fake offer uses a link to a website that is similar to the official website of the airline. The link contains a small letter a while the real link has a regular a. The small difference could be difficult to notice for some since the link is nearly the same.

The fake offer takes users to a website that tells them how many free tickets are remaining with the fake promotion. Users are asked to participate in a survey before moving to the next step.

Once the survey is complete, users are asked to share the link with 15 WhatsApp contacts. They are told that the free tickets can be claimed once they share it with their friends.