Before working on the Bravo app, Maria del Carmen Luna went from being a poor child in Puerto Rico to an entrepreneur with a Bachelor’s and Master’s degree in both business and Public Communications. Maria’s mother was a waitress, and Maria realized how important it was for tipped employees to get their cash. She also knew that there is a trend against caring cash, with people opting to pay with their phones instead. She teamed up with her husband, Hector, to work on a new app that would allow people to send money to strangers without having to give away any personal information. Before appearing on Shark Tank, Maria was able to convince many businesses in the Arizona area to use her app. Will the Sharks be as enamored with the idea since there were already many mobile payouts such as Venmo and PayPal? Let’s take a look. 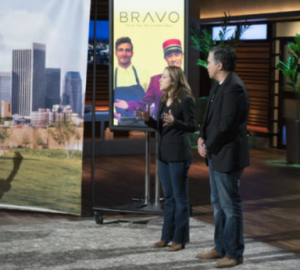 Hector and Maria walked out onto the stage and into the Shark Tank. They introduce themselves as residing in Phoenix, Arizona, while initially being from Puerto Rico. They requested $150,000 in exchange for 5% equity in their company, Bravo. Maria said that it would transform the way that people get paid for a job well done.

Hector continued the presentation by asking the Sharks if they ever wanted to tip or pay the musician, bartender, or valet attendant but didn’t have cash on hand. Maria asked them to imagine how many times they’ve been in a similar situation where they wanted to tip someone that helped them but didn’t have any cash on hand. She said that millions of Americans who depend on cash tips to make a living are missing out on that money due to more people switching over to plastic and mobile pay.

She requested that the Sharks imagine a street performer that depends on the cash tips to make a living and feed his family. They had a guitarist up on stage to simulate the experience. All the Sharks clapped for the performer on stage. Maria continued with the presentation, stating that she wanted to tip the performer for a job well done. Unfortunately, she did not have cash on her but she always carried her phone. She said that this would be where Bravo would come in handy.

Maria said that the Bravo app allows you to find people by proximity. You can also search him by name if he isn’t coming up in the GPS locator. She said that at the end of the transaction, once you entered in the tip, you could also enter a rating. She said it was just that simple to tip or pay and to empower a hard-working person like the performer. She said that the guitarist that they brought with them was actually world-renowned and known for being madonnas guitarist for many years. She said that he even uses the app. They ended the presentation by asking the Sharks if they had any questions.

Kevin asked how he knew that performer had Bravo, or if he wanted to tip him anywhere he could find him. Maria said that they supplied people with point-of-sale material that lets people know that there accepting Bravo. Maria said that they had penetrated 25% of the service industry in Arizona. She claimed that they were dominating Arizona and downloads pop up in over 1000 cities. Kevin wanted to know what dominating Arizona men. He asked her how many dollars in tips they were processing each month.

Maria said that there processing $1 million. Lori asked if she meant in a month, but Maria said it was over the lifetime of the app. She said that they were scaling it by reaching out to service professionals and artists, who were telling their customers about it. Mark Cuban wanted to know what they’re doing about the competition like Venmo. He wanted to know why the performer wouldn’t choose to just put up a sign that had their PayPal address, Facebook messenger app, and Venmo on it and let people pick what they wanted to use. Maria said that it those options were not a secure instrument to connect people to strangers. Alex Rodriguez, or a rod as he was more commonly known, piped up to ask if anyone else was doing the same thing. Maria insisted that Bravo was unique in the market.

Lori wants to know how they made money off the app. Maria said that they took a 2% convenience fee. Kevin wanted to know if that was from the receiver, but Maria said that it was the tipper that paid. She said that if they were planning on tipping $10, they would tip $10.20 and the full 10 would go into the receivers bank account. Alex wanted to know about her background. Lori said that she grew up in a small town in Puerto Rico. It was a beautiful area but her family was extremely poor. She said that her mother made six dollars an hour supporting six kids. She said that she was proud of her background. Her mother said that she qualified for government support but didn’t take it because she wanted her kids to learn how to earn the money that they make.

Maria said that she really took her mother’s words to heart. She graduated high school at 16 and earned everything that she had. She went to the University of Puerto Rico and earned a bachelors degree and a Masters degree she started her career in marketing at Nabisco. After that, she began work on Bravo. She said her mother really inspired her to do that since she knew how much it hurt after a week of poor tipping.

When Alex asked Maria more about the company, Hector jumped in and asked if he wanted to hear about him. Alex apologized and said that of course, he did. Hector explained that he was married to Maria, and was a board-certified gastroenterologist. Lori wants to know if Hector left his job in the medical profession to work on the business full time. Maria explained the actor was working as a physician, and he was also the COO and co-founder of Bravo. Maria said that she was 100% dedicated to Bravo.

Mark said it was very tough as a business. Mark said that doing $1 million in business sounds amazing, but it was really only $20,000 in revenue to them. He said that if they got $200 million, it would still only be $2 million of in revenue to them. He wanted to know how they overcame that. Maria explained that they had two routes to monetization. One came from the transactional fee and one from the machine learning. Hector explains that depending on how the receiver was using the app, as a waitress or a musician, they would be able to see the behavior of their customers in the comments that they get. Marius of that they could predict to is more likely to come back. Mark said that that was what yelp does, but Hector explained that it was private between the merchant and the customer.

Mark wasn’t understanding how this equated to revenue. Maria explains that after their first quarter, they were able to charge more because of the value to the merchant. Maria explains that there is a subscription model that was five dollars per month. That was for premium service. They tested the subscription model out on 65 customers, they produced about $15,000 in income for the app. She thought that that would be where the money would be.

Mark asked if they were able to find 3000 restaurants in the first quarter. Maria confirmed that. Kevin said that that was impressive. Kevin said that his problem with the deal was that it was the wild West in payment processing. He thought it was going to require a lot more money than what they were asking for. Kevin went out. Maria said that it was a real pity because was her favorite Shark. Kevin said that he loved it when people sucked up to him because it really helped.

Alex Rodriguez said that they had an incredible story. He said for him, he was at the back of envelope kind guy. He wanted to keep it simple. He said that if they were unable to go to dinner and have an explanation of the business down on the back of an envelope in the first couple minutes, it wasn’t for him. He felt like it was too many moving parts. He went out, wishing them luck. Maria said that they appreciate his kind words and also what he is done for the Hispanic community in terms of his athleticism and business acumen. She said that she hoped to be able to provide similar opportunities for her community once they made it with Bravo.

Lori was up next. She told Maria that she was one of the most impressive people they ever have on the Shark Tank carpet. she said that she was their customer completely. She had been talking it over with Mark Cuban. She said that they would like to invest in it together. Without hearing the deal, Maria immediately started to get excited. They asked for $150,000 in exchange for 15% equity stake. That was a pretty good deal to get both sharks for only 15%.

Maria said that she understood that they brought a lot of value, but she thought that 15% was a bit high at $150,000. Maria asked if they would be willing to do the $150,000 in exchange for 10% and 2% advisory shares. Lori and Mark discussed it together, and Mark said that they would be able to do it if Maria agreed to 2% advisory shares for each Shark. There is a tense moment while they talked amongst each other, but Maria ultimately took the deal.

Bravo Now in 2018 – The After Shark Tank Update 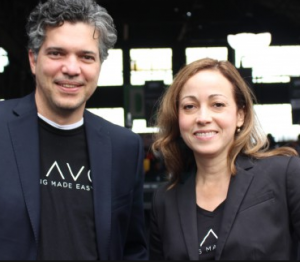 Ever since their episode aired on Shark Tank, the Bravo app has experienced a sharp increase in the number of users that use it on a daily basis. In an interview with biz journals, Maria did not share how many people have downloaded the app. Bravo has a 4-star rating in the App store. It’s a weird split between rave reviews and scathing one-star rant sessions about not receiving funds or login issues. According to their website, they are looking to dive into cryptocurrency at the start of 2019.