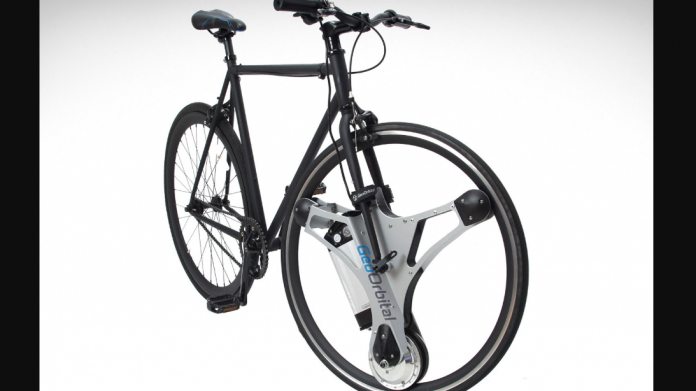 Michael and Dakota, two of the entrepreneurs behind the GeoOrbital wheel, came up with the idea for the electric wheel and the spring of 2014. They came up with the name from the orbital wheel, which does not have a center hub. The creators added Geo to mean “the center of the wheel (which) contains components to make the wheel function as an all-in-one vehicle propulsion system.” Once they came up with the idea, they moved quickly to make a prototype and obtain a patent. They continued to develop prototypes, each one better than the last. In 2016, they felt confident enough in their product to launch a Kickstarter campaign. 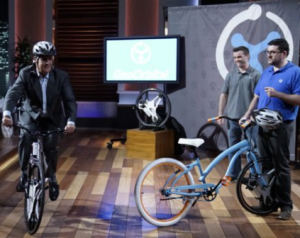 Michael Burtov and Dakota Decker walked out onto the stage to face the Sharks. They introduced their Massachusetts company as GeoOrbital and requested $500,000 in exchange for 5% of their company. They start off their presentation by pointing to a regular bike and commenting that people were using the same one for centuries. Dakota said that maybe he had seen too much science fiction, but he wanted to introduce it to the 21st century. Michael said that the GeoOrbital wheel was a step into the future. He pulled off the cover on the wheel that was displayed on stage. He said that they invented a way of making almost any bike electric.

They modeled changing the tire to the GeoOrbital wheel, claiming that it took less than 60 seconds to do. Dakota said that the bike that they had on stage was a regular one that you would see at any store. He told the Sharks that all they would have to was exchange out the wheel, start the throttle, and then they would be to go. They wouldn’t need any tools, and it took less than 60 seconds. He continued, stating that the motor would go from 0 to 20 miles an hour in under 10 seconds, and the charge with last up to 20 miles. This would enable the rider to go up hills without breaking a sweat. Michael continued, stating that they had 500 W power and the press of a lever.

Before Michael and Dakota could announce that their presentation was over, Kevin was already up and out of his seat. He wanted to try it out. They invited him up on stage, and he asked what he needs to know as he approached the bike. Dakota told him that the pedals and brakes work exactly the same. Dakota asked if anyone else want to try it, and Chris Sacca, the guest Shark for the show, said that he would never wear a helmet on television because that would be a PR nightmare for the rest of his life. Kevin went riding down the hallway with his helmet on, saying that he thought the experience was really cool. Barbara was the next Shark to try the other bike on the stage even in her stiletto heels. Barbara said that she would catch Kevin as he rode past her. Chris said that it was like the blind chasing the blind. As Barbara neared the end of the hallway, she started to panic, asking where the break was. Michael told her that she had to pedal backward. She was able to stop before she hit anything.

As she got off the bike, Barbara remarked that it was like magic. Lori got right down to business. She asked them if they had been on any crowdfunding platform such as Indiegogo or Kickstarter. The coda told her that they had only launched the company four months before they appeared on Shark Tank, but they had already raised millions of dollars on Kickstarter. He continued, stating that since there Kickstarter campaign they’ve sold about $200,000 worth of product on their own website. Mark Cuban asked if they had started shipping yet, or if they were still in prototype. Dakota let them know that they were shipping in two months, but right now they were still in prototype.

Lori said that they didn’t know the price yet. Barbara asked them how much it cost retail. Michael said that the bike wheel retails for $950. Barbara thought that was Steve, and asked if it would be cheaper to just purchase a regular electric bike. Dakota said that it depended on the bike. He admitted that someone could buy an electric bike for almost $500 but it was about the quality of the bike. The main draw of the wheel was that you could use your existing bike. Barbara asked them if the price point had been an issue with any of their preorder customers, but they didn’t believe that it was.

Chris Sacca asked if the market opportunity for the product was just for bikes that were an electric yet. Dakota said that there is a hurdle for people looking to bike. He said that if they got on a regular bike, they could get anxious about getting tired or going up hills. Chris stopped him before he could go any further. He told him that they didn’t have to sell him on the concept of electric bikes. He already owned a couple. Chris thought that the market was going in a direction where all bikes were shipped with an electrical component. Mark asked if they would ever make a bike, and Chris said that that was what he was leading up to as well.

Chris wants to know where they were prioritizing their time – either on the new biker on the wheel. Michael and Dakota both the insisted that the bike was a side note and the wheel was where their business was going to be. Chris told him that that wasn’t the answer that he wanted to hear. He took the moment to also insult Mark Cuban by saying that the rest of the presentation would be as short as the Mavericks highlight reel was last year. Before they could continue, Mark mentions that Chris didn’t have a team. After a little bit more banter, they got back on track. Chris said that he believed that electric bikes were here to stay. He wanted to invest in something that was forward fitting instead of something that could be retrofitted to existing technology. He said that if they had told him that they were moving on the bike, that would’ve gotten him more excited. He saw the bike as goofy right now but also saw the potential in it. He went out, stating that he saw the short term potential in retrofitting old bikes, but thought that there was more long-term potential in making electric bikes more accessible.

Dakota said that he thought retrofitting the current technology to make a futuristic is the future. He said that they were making new technology at of stuff that was collecting dust in the basement. Mark Cuban said that one of the biggest challenges in bike company as a sales and distribution. He said that there’d be an initial jump online, but after that, it was hard to compete in the very competitive environment. They would have to be competing against the small shops, and the big box retailers. He said that it wasn’t a business that he wanted to be in so he was out. Dakota thanked him but added that they were currently direct to consumer but they wanted to do a lot more fleet in the next two years. They would concentrate on consumers as well as police and delivery.

Mark is not impressed. He said that everybody wanted to do the same thing. He said that every motorized vehicle has the same goals. Dakota mentioned that they were different because those companies already had their own bikes. Chris said that that was a good point. Mark said that their price point of $950 was going to make it difficult to make that sale, even if it was deeply discounted. Lori said that she thought there were three roles to a great product. Is it something a customer would need or want, is it something that solves the problem, and can it be made at an affordable price? Lori said that they had both number one and number two, but they were lacking on number three. She was out for that reason.

Kevin spoke up next. He said that he lived in Boston in a tiny brownstone. It was a little bay area. He thought that the little bike would fit and it. He said that he would come over and purchase a bike from them, but they need a couple more iterations to get the cost down. He thought it would have to go below $300. He said that he was a buyer of the small bike, but not the company. He went out. Kevin pointed out that there is still one Shark left – Barbara.

Barbara said that she was in love with the little bike and she already had a name for it. She called it the Bug because it just looks like a little bug to her. She thought it would be hard to sell. She saw herself just purchasing an electric bike because she couldn’t see herself swapping the wheels. She thought she wasn’t going to be alone in that. She said that she would join Kevin in purchasing the smaller bike, she went out. Michael and Evan thanked everyone and walked out. Dakota said that even though they didn’t make a deal, it wasn’t the end for GeoOrbital. They ended it with a bike pun – saying that they would keep on rolling.

GeoOrbital Now in 2018- The After Shark Tank Update 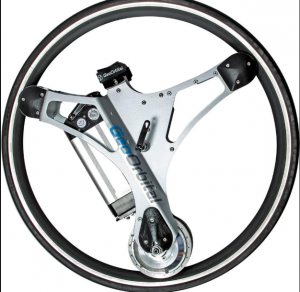 Although Michael and Dakota were not able to nail down a deal on Shark Tank, they didn’t let it get them down. Since their episode aired, they have started selling on Amazon, and in Brookstone stores. They have worked on a Public Safety wheel, which they say was made with law enforcement in mind. GeoOrbital stated on their website that two of the Sharks have bought wheels from them. In 2018, GeoOrbital took home a Gold Edison Award in Performance Technology, ranking them among other innovative projects such as Sophia the Robot and a new kind of ultrasound machine. As of August 2018, they are currently selling shares of their common stock in exchange for a $100 investment in order to finance the purchase of more inventory.