Twin brothers Dominic and Donte launched their pickup basketball game app, HoopMaps, only a few months prior to appearing on Shark Tank. They came up with the idea when attempting to find street basketball games that were about to start, and figured that there had to be another way that didn’t involve driving to different parks until they found one to fit their needs. Donte taught himself how to code, and built up the foundation for the app. They got the app to 50,000 users and 1,000 daily users before they got onto Shark Tank. Will the Sharks take a bite even though HoopMaps hasn’t been monetized yet? Let’s take a look. 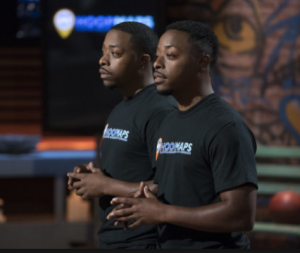 Donte and Dominic Morris walked out onto the stage to face the Sharks. They said that they were twin brothers from Oakland, California. That is said that they were seeking $100,000 in exchange for 5% equity stake in their company, HoopMaps. He asked the Sharks how many of them like to stay active. Before really waiting on a response, he said that one activity he likes to do is play pickup basketball. He said it was difficult to do.

When Dominic asked him what he meant, Donte jokingly said that his twin never picked up his phone. Donte asked why he didn’t just hop into his car and drive to different parks. Dominic said that he did, but every time that happens he was missing a good game or spending his time waiting around just hop into another one. When Donte said that there had to be another way, Dominic said that HoopMaps was the answer.

Dominic said that HoopMaps was a mobile application that allowed players to find pickup basketball games wherever they were. He said that all you have to do is log into the app, create a username and password, and check out the map screen. He said that there are two different colored icons – a blue and an orange. The blue icon represented games that have not started yet, while the orange ones were games already in progress. He continued, stating that was very easy to create a game for yourself. Donte said that users could just click the screen in the top right corner. They could then input the location, and time of the game as well as the game duration. They can even invite people to the game. Donte said that he did adjust invite Alex and Mark and then they would have a pending game. Dominic feigned being upset that Donte did not invite him.

Dominic said that the beauty of the app was that it sends a push notification to all local users within 25 miles of the game. Other users could see people playing, and add themselves to the game. Donte invited Mark Cuban and Alex Rodriguez up to the stage to play a quick game of pickup basketball. Dominic said that he was going to pick A-Rod because he had been in lifelong Yankees fan. Alex laughed and said that this was the wrong sport for him. They quickly played, and Mark made a basket from what would be the three-point line on the stage. Barbara said that you could tell who owned the basketball team. After making the second basket, Mark asked whose house it was and then answered it himself. The other Sharks groaned.

Kevin immediately want to get down to business. He asked entrepreneurs what their sales were and how they were able to make money. Donte explained that they had a premium subscription through their models, they had 50,000 users so far. Kevin asked if that meant that none of the 50,000 were premium users so far. Donte said that that was correct. He claimed that they had just launched the app, and that’s why they were on Shark Tank. Mark said that 50,000 users sounded good, but he realized that they had to be in the same city or else it didn’t work. He wanted to know where most of the users were. Dominic explained that most of the users were in New York City. He said that the way they launched the app, they had 75% of their users based on the keyword pickup basketball in Google. He said that they lead that space.

Donte explained that they were the leader in the space and they had a 72% of their natural search come through people looking for their app online. He thought that $2 million would be a modest valuation. Barbara pointed out that they didn’t have any subscribers yet. Both Mark and Alex jumped in on that, saying that they wouldn’t exactly call it modest.

Alex was wondering if that was the first business that they had ever launched. Dominic said that they had been running a recreational basketball league for the past 10 years. He said that doing the pickup app would be right up their alley. Alex wants to know what their competitive advantage was. He wanted a good reason to invest in their business.

Donte said that it was because they were very familiar with the demographic that their app was playing to. they knew their habits, and what time they played. Kevin said that he bought their story. They had 10,000 active users. He said that the question mark that was hanging over their heads is what the conversion rate would be to their premium services. He pointed out that they didn’t make any revenue yet. Donte explained that they want to charge it $8.99 per month or $100 per year.

Kevin wants to know what he would get for the premium service. Donte explained that premium users would be people that would play a lot of basketball, and might want to find more games. He said that they would provide a better experience for the users that use their app more frequently. Alex is confused. Barbara wants to know how exactly would be better. Donte said that the premium users could see different games in the area. Barbara asked if they couldn’t just do that in the regular app. Mark said that that would be tough. He said that players wouldn’t say that they wanted to play with just premium players. He would look for just warm bodies to play with. He said that he had been pitched pickup location apps a lot. He said that there are other apps and websites wearing people could look for games.

Donte said that a lot of the apps on the market right now try to go into different verticals with different sports. Mark explained that that was because it didn’t work with just basketball. Barbara asked them to imagine that their premium service didn’t work. She wants to know how they are planning on making money with that if that part failed. Dominic said that they would make money through their brands. Lori asked if that was advertising, and Dominic agreed. Lori said that if they can connect a celebrity or some kind of big name to it they would be a lot better off. Lori said that she was not a super sporty person, so she went out.

Alex said that his problem with the business was that it was too small to invest in. He went out, wishing them the best. Mark said that at this point their biggest issue was their revenue model. At some point, they would have to have sales. He thought that the subscription model was going to be really tough. He thought that it would be tough to get eight dollars a month out of someone who would just go back to the same place all the time once they found a game. He didn’t want to make an investment and reinvent the business for them. He went out.

Back in the Tank, Alex said that he was really really rooting for them. He said that it made him excited to see diverse CEOs and founders. Alex continued, stating that it really excites him because in Silicon Valley see a huge lack of minorities and women. Lori agreed with him. Alex said that he wanted a rematch between him and Mark, but wanted the ball first that time. The two went up on stage, and the camera cut out.

HoopMaps Now in 2018 – The After Shark Tank Update 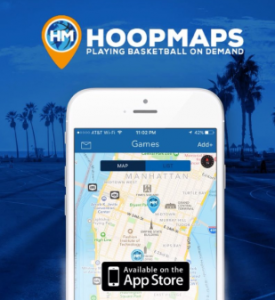 Donte and Dominic did not secure a deal with the Sharks. In an interview with Business 2 Community, in February 2018, the twins told the site that they were on track to produce a sustainable business this year. They were developing the next version of their app to be better at community building instead of just allowing people to seek out games. They were able to team up to work with a professional 3 on 3 basketball league founded by the rapper Ice Cube. The twins also started a HoopMaps Podcast. Unfortunately, their app has not been updated in over 6 months, and the 3.3-star reviews tell a tale of numerous technical issues.