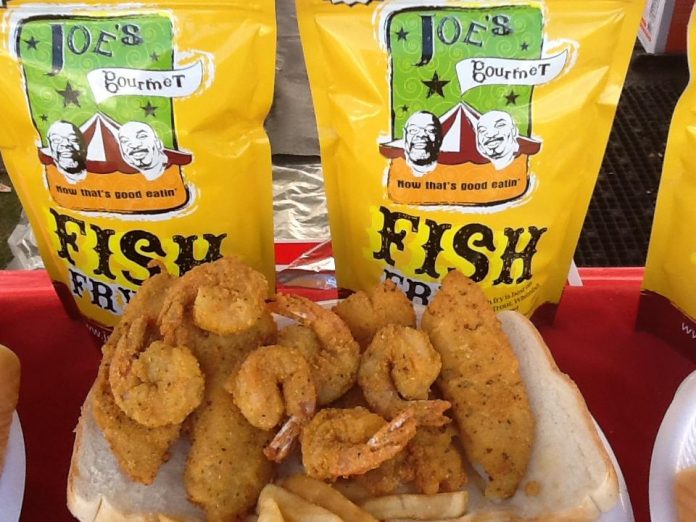 One of the most common types of products to enter the Shark Tank are, of course, those relating to food. This makes sense, of course, everyone eats, everyone loves good food, so the customer base is endless. And of course, sometimes, if you’re lucky, the sharks in the Shark Tank are hungry for more than just good sales pitches. Here, we will take a look at Joe’s Gourmet Fish Fry out of Atlanta, Georgia, where they came from, their appearance on Shark Tank, and what happened after. Did the Fish Fry strike gold, or go bankrupt? Let’s find out. 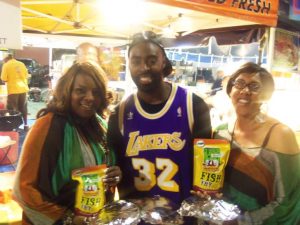 Currently based in Atlanta, Georgia, though perhaps stated to be founded in New Orleans, Louisiana, Joe’s Gourmet Fish Fry has a story that any American company would envy involving creativity, grit, resilience, family and love of the work being done. While not initially seen as a take-home product, Joe Dowell and his father, confusingly also named Joe, started out with Joe’s Po’ Boys (a type of sandwich popular in the South, usually being filled with fried meats) as a way to show their food chops. For Joe Dowell jr, this was a transition from being first a manufacturing worker to a server, and for his father, it was a way to make more money outside of his own retirement. Big Joe, as Joe jr’s father is often called, had wanted to be a business owner all his life, but was more or less required to drop his dreams and join the Air Force to support his young family through the Vietnam War era.

The franchise would climb to 6 locations in Louisiana (including one where he would meet his future wife, which will be discussed later), but then when 2 of the locations were wholly devastated by Hurricane Katrina, the other 4 locations were quick to close down. Left with basically nothing but two good fryers, Joe decided to load up the fryers and bet it all on his ability to make great food, taking to the road and serving food at street corners and festivals under tents. After several years of growing a reputation for having a light, clean and delicious taste, Joe’s fry skills began to get a significant following. This following though began a bit of an odd request. Customers would occasionally show up with their own containers and ask for some of the breading so they could make the fish or other fried goods at home instead of having to bounce around the festival scene and considering themselves lucky to actually encounter Joe. This would allow Joe and his wife Maranda, alongside funding from Big Joe, to take a break from the festival scene and begin their own breading business full of Cajun flare and flavor. Within three years, the company would begin to show up on store shelves and show a great deal of promise in an admittedly flooded field. This is where we catch up to the owners of Joe’s Gourmet Fish Fry on Shark Tank. Did they get a deal? And how well did said deal pan out? Well, there’s only one way to find out.

The episode starts off showing the family in their home kitchen in Atlanta, Georgia, where the owners tell their great origin story. Starting off, Joe had owned a pair of restaurants near New Orleans, Lousiana, but like so many places of note in that city were devastated as a result of Hurricane Katrina. Joe notes that his whole family, including his father, has invested a good deal of time and money into their fledgling business, and the family would not have it any other way.

As Joe and his wife Maranda walk down to meet the sharks, they are both all smiles as they boldly ask for $150,000 for a 15% stake in the company they have created. Maranda takes the lead on the pitch stating that Joe’s Gourmet Fish Fry is all anyone needs to fry something up that’ll be delicious, as it’s an all-in-one package, great for not only traditional frying but also such methods as air frying. Joe then takes the baton and invites the sharks to try it with chicken, crab cakes, and other dishes. The pair then proclaim that once anyone tries their fry, they buy it, and get everyone hyped up to try samples, especially Mark Cuban. 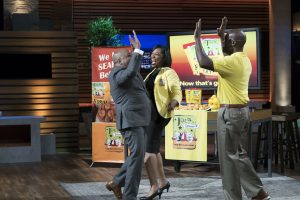 Maranda pulls out a tray of Shrimp, Halibut, Zucchini, Chicken and Scallops, which absolutely kills when it comes to flavor. When asked about the numbers behind the business, it would seem that Maranda and Joe are making by far the most money doing direct business at $5 a bag as opposed to dealing with wholesale dealers who instead buy bags at $2.25 to $2.50, with the costs of each bag to the producers being around $1.75. Lifetime sales have included $409,000 with $270,000 of that being earned in the year of filming, and a projected $450,000 to be earned in the next year, primarily due to being picked up by Wal-Mart in the past 7 weeks.

Both the owners still go out as salespeople, as it happens, and claim to not return home until 3 pallets of the fry mix have been sold. The pair then go a bit further into their background, with Joe stating he was a blue collar worker turned waiter, then turned restaurant owner as mentioned above, and Maranda being in Advertising and meeting him on a business call. Apparently, Joe was quite forward in stating that he would one day marry Maranda, which is certainly the case, just over 8 years later, and having only dated 2 weeks. Joe then mentions that all 6 of his stores shut down due to the storm, but he still had two fryers operational. So, in a split second decision, he and his father began taking the fryers and his recipes to festivals under a tent and selling the fish and other goods anywhere they could. It was, in fact, Maranda who noticed that maybe it’d be more lucrative to sell the mix, as people would show up at these events asking to take the mix home for themselves.

Joe’s Fish Fry has officially been in business 3 years and now has 800 stores buying from them, with customers being Krogers, Wal-Mart, and Publix. Amazingly, only $50,000 has been used to fund the business up front, most of it from Joe’s father who owns 85% of the business. One of the Sharks claims that this business isn’t worth $1 million and drops, with another stating the business just wasn’t for them. Cuban likewise backs away, not supporting it except in spirit. Yet another, Robert, likes the product but thinks his offer won’t leave them happy, and instead backs down. Daymond is the final shark, and offers $150,000 for 25% of the business, which is accepted quickly after Maranda gets shouts of “No!” from the Sharks when she asks for the same amount for 18%. Now, this deal meant that Daymond saw a lot of potential in this company. Did this turn out true, or did his money just burn away? Let’s find out. 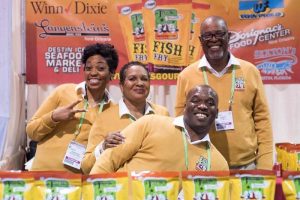 As of 2018, it appears that Joe’s Gourmet Fish Fry has been a huge success. Not only has Joe’s avoided the bankruptcy or potential failures that the other sharks may have seen coming when Daymond invested, but have in fact experienced a great deal of expansion into several grocery stores. As an added bonus, their revenue has jumped as a result of being part of Wal-Mart’s showcase of products from businesses with diverse backgrounds.
It would seem that the Fish Fry company has earned what they expected to in net earnings while on Shark Tank and only are expanding from there, is yet another inspiring story of American grit and creativity. And like all heroes of business, Joe’s does indeed give back and have since their founding. In particular, the family has been donating and serving Safehouse Outreach, a homeless charity and service organization. Since founding, primarily the owning family, but all involved with Joe’s have served over 12,000 people to ensure that they have at least a decent meal when they look for help. While no one can readily predict the future, one could say that Joe’s Gourmet Fish Fry is set for continued success, and customers can expect great flavors for years to come. If you are interested in keeping updated with Joe’s, their official site offers pretty regular updates and sales, including a brand new gluten-free breading for those who would otherwise not be able to taste the deliciousness of Joe’s. Their facebook page is also very popular, featuring a 4.9/5 rating, some pretty funny memes, and overall a very positive community surrounding it. If you are interested in learning more about Joe’s, it is heavily encouraged that you check both of those pages out.