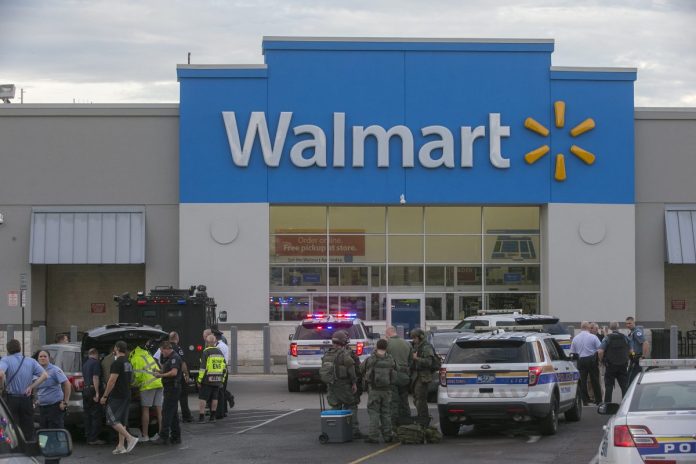 A gunman has left several people injured after he opened fire during an argument. The incident took place in the checkout area, where there were many people. Authorities say Keenan Jones fired at least ten shots during the argument.

The shots sent people running for cover but four were shot while others suffered injuries as they ran. Authorities say Mr. Jones fled the store with his sister but crashed into a police car.

NBC Philadelphia read the criminal complaint, which says that the surveillance shows him standing in the checkout and then starting to walk back. He then pulls out a handgun and fires a single round at a person standing near him.

Several people were injured but it’s been confirmed that they are not in critical condition. Three people were shot in the leg while a fourth person suffered a graze wound. Emergency teams transported a pregnant woman to the hospital after she fell.

WPVI-TV reports that he had previous convictions that banned him from having a gun. Police say the two fled the store in a Pontiac Grand Prix but later crashed into a police car. Mr. Jones fought with officers after crashing.

Police Chief John Frye said during a news conference that there was some sort of altercation at the register and that words were exchanged. He didn’t give any details on the argument but he said Mr. Jones took the gun from his sister’s waistband and started firing.

Store Was Crowded During The Incident

The store was crowded with shoppers at the time and many ran for cover during the incident. The two then fled the store but were arrested shortly after. Local media reports that the suspect tried to kick out the window of the police car after he was arrested. Witnesses saw when the gun was thrown out of the car.

The company released a statement on the incident and said three of the injured work in the store. The fourth person injured was a customer. Mr. Jones is now being held on a $1 million bail. The suspect’s sister has not been charged.