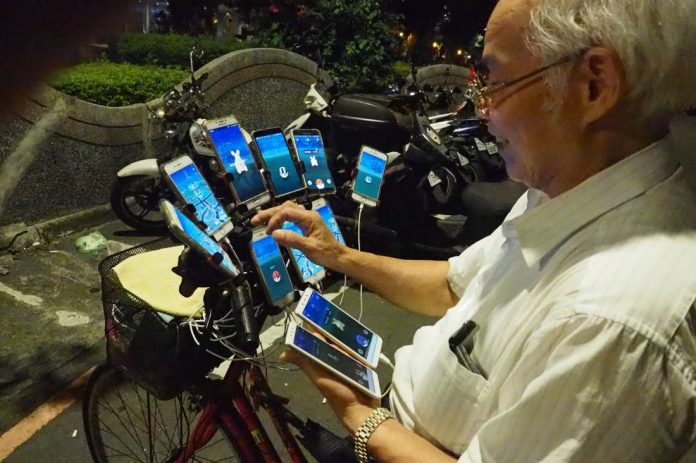 A man in Taiwan has created a setup to catch every Pokemon he needs. Chen San-yuan has placed 11 smartphones on his bicycle to play Pokemon Go. The man is not planning to stop there, he said he is going to place four other smartphones.

The bicycle and pictures of him visiting places with his 11 smartphones have earned him the nickname Uncle Pokemon. The Taiwanese man has not caught every Pokemon but he is on his way.

He learned about the popular Pokemon Go game from his grandson. He began playing the game and is now looking to catch all the Pokemons. The augmented reality game has a large roster that can take a while to catch.

The bicycle and all of the equipment used by Uncle Pokemon to catch the Pokemon is a bit expensive. He uses several smartphones and from the pictures, it appears that he mainly uses iPhones, which are some of the most expensive devices out there. The BBC reports that he spends more than $1,290 a month.

The Taiwanese man spends a lot of time playing the game so he has equipped his bicycle with everything to keep the phones charged. He uses battery packs, which he keeps in the bicycle’s basket, to power all of the 11 smartphones.

The man has become a celebrity in the city of Taipei. The bicycle with the smartphones often catches the attention of residents who are curious to see what he is doing with all the devices. He first began with a few devices but now plans to have many more.

The photos of him visiting places around the city have appeared in reddit and social media websites. A Taiwanese channel recently interviewed him about his idea. He had nine smartphones at the time of the interview. He currently has 11 and plans to add a few more to his bicycle.

Pokemon Go, launched in 2016, quickly became one of the hottest games of the year. The augmented reality game has earned the game developer millions of dollars and the app continues to be very very popular in a lot of countries.