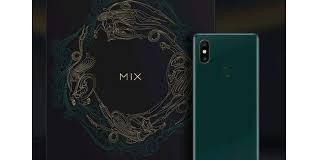 One of Xiaomi’s biggest releases this year will be getting a new color option. The Mi Mix 2S was launched in White or Black color options but the company will soon offer the Emerald Green Edition.

The new limited edition variant has been created with the help of Dunhuang Academy. The new color is similar to the one seen on Jade gemstones that are sold in China. The limited edition smartphone will be available on August 14.

The Mi Mix 2S was one of the first releases of the company this year. The smartphone was released just months after the Mi Mix 2. The device comes with small changes over the previous release.

The Mi Mix 2S could end up being one of two releases of the series in 2018. In the last few days, several reports have mentioned that the company is working on a Mi Mix 3. That device is said to be launching in September. Xiaomi has not confirmed anything but September is next month so we’ll probably find out more if everything is true.

The Mi Mix 2S has been released in many countries but the company has not revealed if the limited edition will be available everywhere or how many units it will sell.

The Emerald Green edition just brings a different color to the smartphone. The specifications remain the same as the standard Xiaomi Mi Mix 2S. The Mi Mix 2S has a 5.99-inch display, Snapdragon 845 processor and dual 12MP cameras. Xiaomi has released several variants of the smartphone but the limited edition Emerald Green comes with the highest specs available, 8GB RAM and 256GB internal storage.

What do you think about this new limited edition release? Have you ever owned a Xiaomi phone? Let us know in the comments.