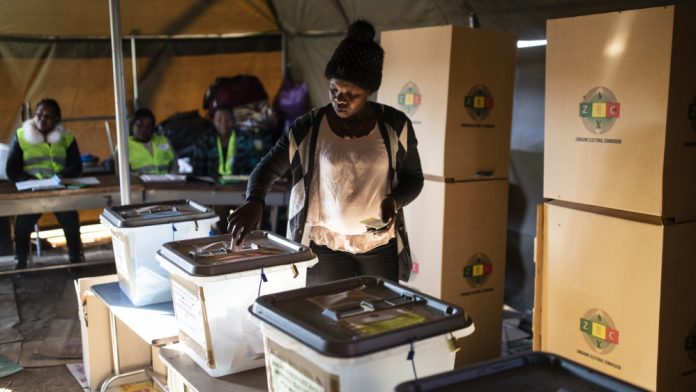 Zimbabwe’s opposition leader, Nelson Chamisa, has spoken following the results of the presidential election. The leader of the Movement of Democratic Change party has described the result as illegitimate and fraudulent.

His comments came during a press conference, which was his first appearance since the results were announced. Emmerson Mnangagwa was declared winner during the early hours of Friday.

The presidential election was the first vote of the country since Robert Mugabe was removed from power ten months ago. Mr. Mnangagwa worked with Mugabe for years but was fired as vice president in early November. Reports later said he had fled the country due to death threats. The former vice president vowed to return to the country after he was fired.

Mr. Mnangagwa invited the media to his official residence and said the elections had been free and fair. Mr. Chamisa has a different story on how the presidential election went. He said during his press conference that Mr. Mnangagwa did not win and that they won the election emphatically. He also went on to say that the country is seeing a repeat of the last regime.

The wait for the election results turned violent as six people were shot dead by the army during protests on Wednesday. Mr. Mnangagwa has announced that there will be an investigation for the incidents that took place on Wednesday. He also apologized for the incident that happened before the press conference.

Mr. Chamisa was at the Bronte hotel for his press conference but it had to be delayed after police ordered the crowd to disperse. Journalists were told to come back for the press conference minutes later.

It is unclear what the MDC party is going to do after saying that the results are fraudulent and illegitimate. Experts say they will likely challenge the results through court. The country’s electoral commission said on early Friday that Mr. Mnangagwa had received 2.6 million votes (50.8 percent). Mr. Chamisa received 2.3 million votes (44.3 percent).