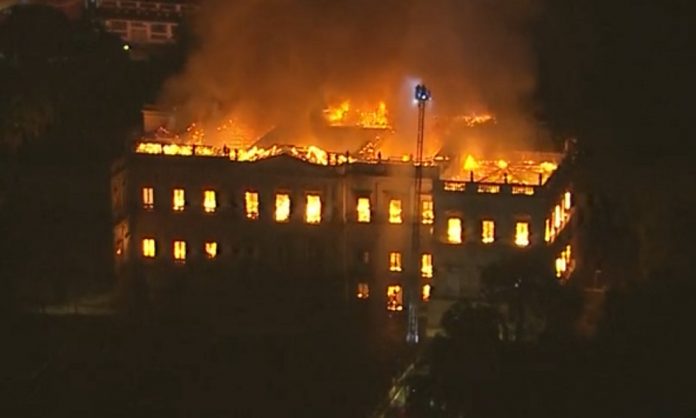 A fire that nearly destroyed all of Brazil’s National Museum has been blamed on the funding cuts. Officials in the country said the lack of funding left the museum with little support. The museum, which held some of the largest collections of natural history and anthropology, was nearly destroyed by a fire on Sunday.

Its deputy director said after the fire that there had been complaints about the state of the place. The fire started on Sunday evening and the museum was closed at the time. The cause is not yet known but the Culture Minister was quoted as saying that it may have been started by a hot air balloon made out of paper. He said the paper hot air balloon may have landed on the roof.

The Culture Minister said that it was a tragedy that could have been avoided and that reconstruction plans would begin. No injuries were reported but the fire destroyed most of the museum, which was the home to millions of items.

Brazil’s President Michel Temer spoke on the incident on Twitter, saying 200 years of work had been lost. The museum was closed during the fire and experts had little time to save some of the items.

Paulo Buckup, an expert working for the museum, found parts of the buildings where items were still intact. He told BBC Brazil’s Julia Carneiro that it is unfortunate that firefighters were not in a position to do anything. He explained that the firefighters had no water, ladders or equipment to battle the fire.

Mr. Buckup said they took the initiative to get in there and save the items they could. He said they had to break down doors to get in and that soldiers helped them carry things. The expert rushed into the building to save part of the collection of molluscs. He said some of his colleagues who have worked there for 30 or 40 years had lost their work.

A spokesman for the Rio fire department was quoted by the Associated Press as saying that the hydrants located near the museum were not operating and that emergency teams had to get water from a lake close by.

Protesters were at the gates of the museum earlier today. Many of them were protesting over the lack of funding. Authorities are still investigating the cause of the fire.