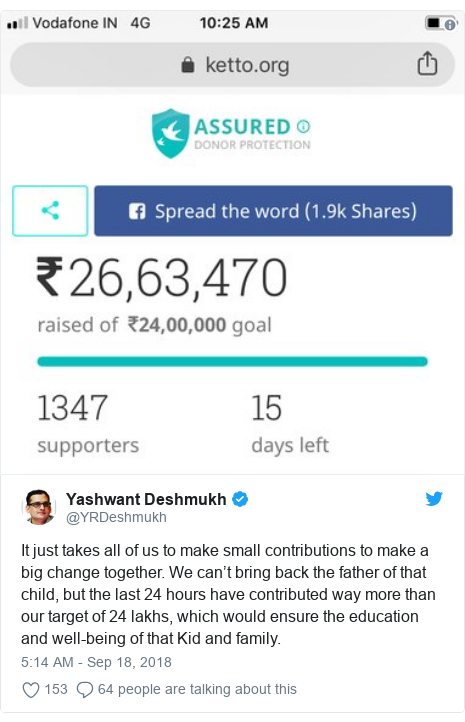 A picture of a boy crying next to his father’s body has caught the attention of hundreds of social media users, who have donated everything they can to help out the family. In one day, the social media users raised millions of rupees for the boy and his family.

The picture surfaced on social media and it was shared by thousands. It was revealed that the family was going through a difficult time and the picture raised over three million rupees ($41,000) in just one day.

Anil, who was a sewer worker in the city of Delhi, lost his life when the rope holding him snapped and he fell inside. Unions allege the incident happened because workers are not provided with safety equipment.

The heartbreaking picture was first tweeted by Shiv Sunny, who is a reporter at The Hindustan Times. He made the post on Monday and it was quickly shared by thousands of people. The picture shows the boy crying as he is standing next to his father’s body.

The reporter spoke to the BBC and said that he was shaken by what he saw. In the tweet, the reporter explains that the boy went up to his father’s body at the crematorium. He adds that the man was another poor worker who died in a Delhi sewer. He finishes the tweet by saying that the family did not have money to cremate him.

The reporter took the heartbreaking photo just minutes before Anil was cremated. Mr. Sunny explained that he is a crime reporter and that he has seen a lot of tragedy but this was something he had never seen. He said he just wanted to draw attention to those who are losing their lives working in sewers.

The family was going through difficult times before Anil lost his life. The reporter said the family could not afford the cremation costs and that they had received the help of neighbors. He was also told that Anil’s son, who was four months old, had died a week before from pneumonia. The family says his son died because he did not have enough money to buy the medicines he needed for his recovery.

Help From People and Organizations

Mr. Sunny’s post caught the attention of thousands of people and also the Uday foundation, an organization that decided to help. The organization used Ketto, a fundraising platform, to help out the family.

The fundraiser surprised the reporter and everyone who decided to help since thousands donated in a short amount of time. The reporter said it was totally unexpected and that even poorer people donated small sums of money.

Authorities told NDTV that the investigation into Anil’s incident found that the rope was not strong enough to hold him. He was also not wearing safety equipment when the rope snapped. Anil’s death is not the first involving sewer workers. A few weeks ago, five other workers lost their lives at a sewage treatment plant. Authorities said the workers did not have safety equipment at the time of the incident.

Authorities detained a supervisor after the death of the five workers. The incident also happened in Delhi. The reporter talked to the family after social media users began asking questions about them. He was told by the son that he would sometimes go with his father to work. He said he would wait outside and guard his clothes and shoes from thieves. He also said his father wouldn’t let him enter the sewers.