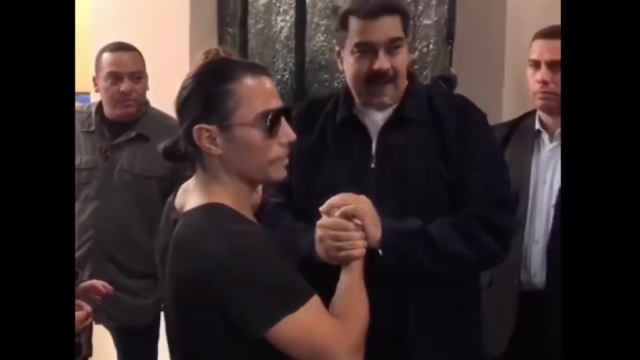 The chef known as Salt Bae on social media has angered thousands of Venezuelans, especially those who were following his very popular account. Turkish chef Nusret Gokce, who became a meme over his salt sprinkling on meats and other foods, has been heavily criticized for his most recent post.

The famous chef, who owns several restaurants around the world, was visited by Venezuela’s president Nicolas Maduro at his restaurant in Turkey. The criticism came shortly after when he posted videos of the visit by the president.

Gokce, who has over 15 million followers on Instagram, made three posts on the site. In the videos, he is seen making his famous routine at his Nusr-Et restaurant located in Istanbul. The Venezuelan president, who is seen holding a cigar with his mouth, is sitting with his wife Cilia Flores.

The famous chef is seen cutting the meat and sprinkling the salt on their food. The posts were made on Instagram but were quickly deleted after thousands of Venezuelans took the comments section. The videos were saved by The Miami Herald and several other news sites.

In one of the videos, Maduro is seen arriving to the location along with his wife and staff. He sits down with a cigar and is seen wearing a shirt of the famous chef sprinkling salt. He watches as the chef does his routine.

Venezuelans who have fled the country over the crisis and those still in the country took the comments section of his posts to criticize him. Some said the chef should have not allowed the president in the restaurant while others asked for a boycott and protests at his other restaurants. Others said it wasn’t really his fault that Maduro showed up to the restaurant.

Gokce owns a restaurant in Miami, a city where many Venezuelans are living. Florida Senator Marco Rubio was not happy with what he saw between the chef and president. The Senator took social media to criticize the chef, first saying in a tweet that Gokce is a weirdo. He adds in the tweet that Maduro is an overweight dictator of a country where 30 percent of the people eat only once a day.

Marco Rubio made another post on Twitter a few minutes later. In that post, he reveals that the chef has a steakhouse in Miami. The Senator posted the address and phone number of the restaurant. The famous chef had 15.9 million followers last night and is now at 15.8 million.

It is not the first time that Salt Bae lands in hot water over a post. A few months back, he angered Cuban Americans when he dressed up as Fidel Castro. Venezuelans in the comments section asked people to unfollow him while others said they had already unfollowed him after he was seen serving food to soccer legend Diego Maradona at one of his restaurants. Maradona has been heavily criticized in the past for making appearances during Maduro’s campaigns.

Polls by Meganalisis say nearly a third of Venezuelans eat once a day and another 30 percent say they eat nothing or almost nothing at least once a week. Venezuelans also don’t have any access to foreign currency while Maduro is seen eating at a very expensive restaurant.

The Miami Herald reports that the same item seen in the video costs $275 at his location in Miami. The minimum salary in Venezuela was less than $3 a day before the government introduced the economic plan, which has only brought more confusion and inflation to the country.