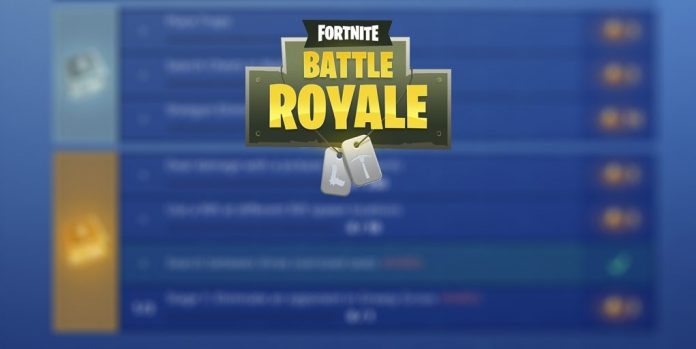 The trap challenge is back and while it sounds easy, it might take a while for some. The challenge requires you to deal damage and get an elimination with one trap. Traps are common around the map but you have to get an opponent to run into one.

At the start of a game, if you run into a crowded area such as Salty Springs or Tilted Towers, place a trap in the entrance of a building. This usually works since opponents are in a rush to get weapons and shields. Another thing you can do is surround an opponent and place a trap inside the structure.

This challenge is very simple but you’re going to have to play at least ten matches. For this challenge, you have to get one elimination in ten different matches.

Hit Player With Tomato From 15m Away

This challenge is one of the easiest of the week and it can be completed before the game starts. In the waiting lobby, you can hit other players or your friends with a tomato. Make sure to be 15m away when throwing the tomato. The game will tell you exactly how much distance you need.

The other locations are a bit far so you’ll need to find rifts or some transportation to get there as quickly as possible.

The Week 3 challenges include two that have five stages. The second challenge that requires five stages is search chests. The first location is Lonely Lodge, which can be found right on top of the race track or near the mansion on the right side of the map.

All you have to do is find a chest in this location. There are plenty over there, including two on the big house and a few others on the tower.

This challenge is pretty simple and will be completed if you just play matches with a squad or duo. All you have to do is revive a friend when he is knocked down. The challenge requires you to do this in five different matches so it could take some time.