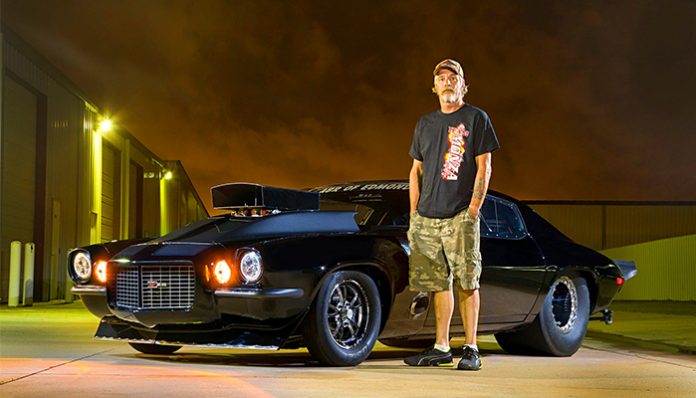 An established street racer, Jerry Johnston aka “Monza” is best known for his appearance on the reality series, Street Outlaws. One of the main cast members, he made his debut in the first season, which premiered on the Discovery Channel in 2013. As of 2018, he has starred in all ten seasons of the show.

Owing to the popularity of the series, he has earned a considerable fan base over the past several years. For instance, he has gained more than 1.3 million fans on Facebook and over 100,000 followers on Instagram.

How much is he paid for his work on Street Outlaws? How much has he earned from the show since 2013? What is his salary? How wealthy is he? According to some sites, Monza has amassed a net worth of $500,000 as of 2018. How much of this came from his work on television? Aside from the series, what else is he involved with? Let’s find out.

How did Monza Make His Money & Wealth?

Hailing from Oklahoma City, Jerry Johnson aka “Monza” has been racing since the early ‘80s. In 1986, he married his wife Tammy Johnson; they later welcomed two children, a daughter named Brittani and a son named Brandon Johnson. Unfortunately, not much has been revealed about his early life at this time. A renowned driver with top-notch skills, he quickly became a fan favorite on Discovery’s Street Outlaws.

Premiered on June 10, 2013, the reality series centers around the street racing scene in Oklahoma City. One of the main stars, Monza owes much of his popularity to the show, which is currently on its tenth season. Standing at 6’4”, Monza races with a 1972 Camaro Rally Sport, with which he was won a number of titles over the years. In fact, he has been on The list since 2006.

Well received, Street Outlaws has proved to be a hit since the beginning, with over a million viewers tuning in each week. Some of the other racers featured in the series include Chuck, Flip, Big Chief, Murder Nova, Varley and Daddy Dave. As of 2018, there are twelve seasons, the last of which premiered on May 28, 2018.

Considering everything, it’s likely that he is paid a considerable amount for being on the show. Unfortunately, however, the exact numbers have not been revealed to the public. If we were to make a guess though, he probably earns tens of thousands of dollars per season. Of course, he would also bring home some amount from winning races.

In terms of other ventures, he and the rest of the racers also take part in live shows throughout the year. In fact, they have several dates scheduled for the next few weeks. For more information, you can check out Street Outlaws’ official website here.

If you want to support the racers, there’s also an official Street Outlaws store, which you can visit here. A fan of Monza? Why not grab one of his Sinister Split Bumper tees?

Yes, he has been married to his wife Tammy Johnson for over three decades, since 1986.

Does Monza Have Any Children?

Yes, he does. A father of two, he and his wife have two grown children named Brittani and Brandon.

Does Monza Go to College?

Unfortunately, not much has been revealed about Monza’s education background. As far as we can tell though, he has not attended college.

What is Monza Famous For?

Monza rose to fame as one of the main racers in the reality series, Street Outlaws. As of 2018, he has starred in all twelve seasons.

Where Does Monza Live now? Photos of Monza‘s House

Monza currently resides in Oklahoma City, Oklahoma, where he continues to race professionally. Unfortunately, we do not have any further details at this time.

What Kind of Car Does Monza Drive?

Monza races with a 1972 Camaro Rally Sport, that has been fitted with a 598 cubic inch Big Block Chevy Engine, a PTC Powerglide Transmission and Converter and 2 Monte Smith custom flowed nitrous foggers, according to the official Street Outlaws website.

How Much Money Did Monza Make Last Year?

We do not have any information on Monza’s 2017 salary at this time.

Monza most recently starred in the twelfth season of Street Outlaws, which premiered earlier this summer.

What’s the racer up to nowadays? If you’re a fan, why not check out Monza’s social media accounts? You can find him on Twitter at @StOutlawsMonza or on Instagram at @Team_Monza405. On Facebook, you can also show your support on his official fan page here.