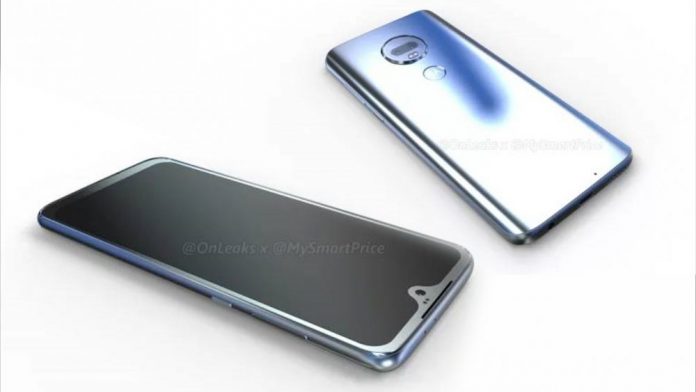 The Moto G7 is still a while away from debuting but renders have already started surfacing. The latest release, the Moto G6, didn’t start making noise until earlier this year. The phone was announced back in April, so information about the Moto G7 is surfacing very early. The render doesn’t mean that it is official but it does give us an idea on where the company might go with this release. Here is all we can see from the latest Moto G7 render:

The Moto G7 will likely make its debut in early or mid 2019. The series has been consistent on bringing solid devices at very good prices. The Moto G6 continues that with the Moto G6, Moto G6 Play and Moto G6 Plus.

The Moto G6 line brought several interesting additions but the render from OnLeaks shows that the Moto G7 will be an impressive device, at least on the design.

The images of the Moto G7 show the back, front and sides of the smartphone. The images actually show a device with the look of previous Moto G smartphones, especially from the Moto G6.

The image of the back of the phone shows a lot of similarities from recent Moto releases. The dual cameras are housed inside a circular area, kind of like we see on the Moto Z or the Moto G6 phones. Under the dual cameras, there appears to be a fingerprint sensor, which has the Motorola logo.

The addition of a notch would be a first for the Moto G series. Tech fans aren’t all convinced about the notch but it is not a surprise to see that there are more phones coming with it. In recent months, we’ve even seen Motorola announce phones with it.

It appears that the notch will continue with the Motorola releases. The Moto G7 has the difference that it won’t be a long notch like we see on the P30. The rest of the images show that the Moto G7 might be similar to the Moto G6 in many ways.

The specs will likely be very different though. The upcoming smartphone is rumored to have a curved glass back, 6-inch display and dual cameras of 16MP + 5MP. At least 4GB of RAM and 64GB of storage are expected for this release.

In recent weeks, rumors have mentioned that the Play version might be left out for next year’s release. This version returned earlier this year after a one year break from the Moto G5. The Play version offers an even more affordable price than the Moto G6 and Moto G6 Plus.

There are other reports out there saying that this might not even happen and that the lineup will actually be bigger next year. The Moto G series has featured up to three variants but recent reports have said that the company might be planning to release four models.

The Moto G7 is still some time away but this is some interesting information while we wait for 2019.