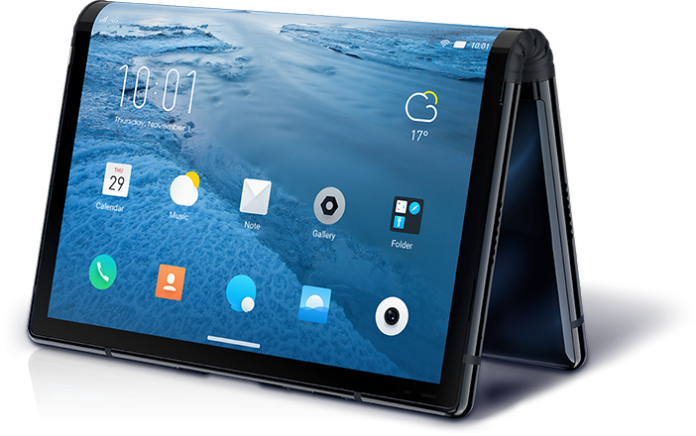 Royole, a California based company that was founded in 2012, says it has created the world’s first foldable phone. The company unveiled the FlexPai device at an event in Beijing.

The device opens up and is much larger than most tablets in the market. The phone can also be folded. The device has a total of three small screens, including one on the rear.

The technology is currently one of the biggest tech topics since it is said to be arriving next year. Big companies are rumored to be working on foldable devices such as smartphones and laptops.

Royole Corporation has only been around for six years but the company is looking to make noise by being one of the first to release a phone with this technology. ZTE made one of the earliest attempts by releasing the Axon M, a smartphone with a dual screen.

Royole Corporation has also announced that it will bring different versions of the phone to developers. The company didn’t give any details into that but the flash sales are said to be happening tomorrow so it probably won’t be long before Royole gives more information on that.

Royole is planning to start deliveries in December, which means that the phone will be out before big smartphone makers make their announcements. Recent reports had Samsung and Huawei as the companies in the race to unveil the foldable technology this year.

Samsung has also been making a lot of noise when it comes to foldable phones. The technology has been in the news since 2013, when images of a concept surfaced. Samsung’s foldable phone is rumored to be coming in early 2019. Reports have recently mentioned that the company is also planning to bring the technology to other devices such as laptops.

The FlexPai Phone is coming from a company that was founded just six years ago. The announcement comes out of nowhere since we hadn’t really heard of the device. The rumors on the technology have mostly involved Huawei and Samsung.

The Flexpai Phone isn’t exactly in the affordable category since the most expensive variant costs a whopping $1,863. Smartphone prices have increased in recent years but this price takes things to a new level.

The price isn’t very surprising though, reports have repeatedly mentioned that releases with this technology will come with a high price tag. Analysts believe the phones could cost up to $2,000. For reference, premium smartphones such as the Apple iPhone XS and Samsung Galaxy Note 9 cost $1,000.