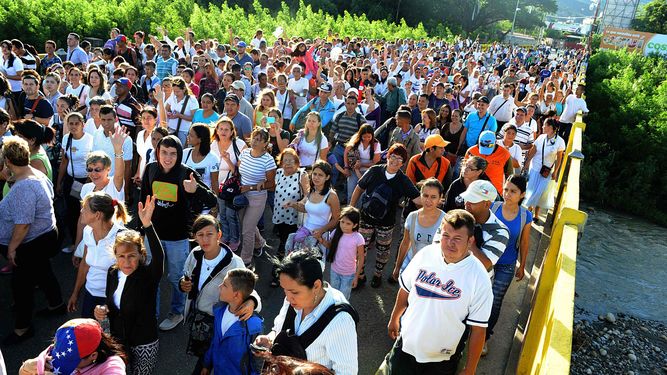 Nearly two million people have fled Venezuela since 2015, according to the UN. The economic and political crisis in the country has been a big topic among neighbors, including Brazil and Colombia, which have taken in thousands of Venezuelans in recent months.

The UN’s Refugee Agency UNHCR said on Monday that some 5,000 people are leaving the country every day. A spokesman for the agency told AFP that 1.9 million people had left the country in the last three years. It had been previously said that the number was 1.6 million people.

A large percentage of the Venezuelans that have left the country have moved to the US, Colombia, Chile, Ecuador, Peru, Brazil and Argentina. Estimates say Colombia has taken in more than a million Venezuelans in recent years.

Latin American countries have met and some have criticized the Venezuelan government for the situation. Chile, which is among the top seven countries that have taken in the most Venezuelans, has heavily criticized Maduro for holding onto power. Chile’s President Sebastian Piñera recently said he does not want to see a military option for the country.

Venezuela’s economic problems began in 2014 with the fall of oil prices. Venezuelan government officials have announced several measures and introduced big changes to the economy but the problems continue. Just a few weeks back, the government announced the removal of zeros off the currency as well as a system to sell oil to those who are signed up with an ID that they have created. The new changes have sparked confusion among the population and reports say many businesses have not opened their doors since they took effect.

Maduro and a few other government officials made a surprise visit to New York just a few days ago. The president confirmed his attendance to the UN in a video recorded inside a plane.

The Venezuelan government has repeatedly denied that there is a humanitarian crisis in the country. They have even started a program to bring those who are unhappy in other countries back to Venezuela. Venezuela’s vice president recently said that the numbers are far lower than those given by the UN and other organizations.

Other Venezuelan government officials such as Diosdado Cabello have suggested that it is all staged. His comments came after pictures of Venezuelans walking along roads of Ecuador and Peru surfaced.

The exit of thousands of Venezuelans has collapsed border towns in Brazil and Colombia. In some towns, the situation has gotten out of control, with residents protesting or clashing against the Venezuelans who have entered. A few weeks back, Brazilians in one of the border towns clashed with Venezuelans when they heard that a merchant had been robbed in the area.

The International Monetary Fund (IMF) predicted a few months back that inflation there would reach one million by the end of 2018.