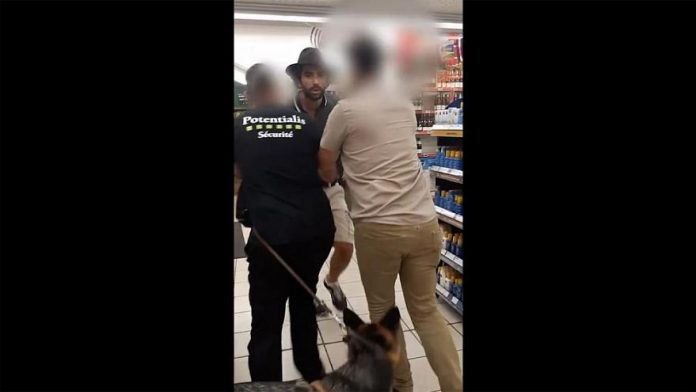 A video of a visually impaired person and his dog being removed from a supermarket has sparked outrage. The incident happened in France and the video has caught the attention of thousands, who have taken social media to criticize what the staff members did.

Arthur Aumoite posted a video of his visit to a Monoprix outlet in Marseille. He took his guide dog for the shopping trip, which came to an end when he was stopped by the staff members.

The situation escalates and he tells staff that he is not leaving. The video later shows the man being pushed by a staff member while another employee is moving his dog. The video ends with one of the employees taking the dog to the entrance of the supermarket while the man is still arguing with the other staff member.

The video of the incident was taken by another person who was with Mr. Aumoite. It is unclear what happens after the video stops but Mr. Aumoite told local media that the paper he is holding during the incident is a flyer with information.

He says staff didn’t really look at the information he was holding. He added that the manager repeatedly said it was over hygiene reasons.

The guide dog association in the country said the man asked them to help show the video, which has been viewed by many in just a few days. The video was posted on his Facebook page and it currently has more than one million views.

Social media users have criticized the supermarket and the decision of the staff members to try to remove him and his dog. Monoprix, the supermarket involved in the incident, has responded the criticism from the video. The company apologized to the man for the way he had been treated during his visit.

The statement released by the company said it strongly condemned what happened and said it had been fighting discrimination for years.

It is not the first time that an incident like this sparks outrage this year. Back in early July, a blind man and his guide dog had to leave a restaurant after staff refused to serve them. Dave Kent and his dog Chad attempted to order food at the Franco Manca restaurant on Tottenham Court Road.

Mr. Kent explained to employees that his dog is a guide dog and that he had all the equipment. The employee later contacted the manager but he was not allowed inside the restaurant.