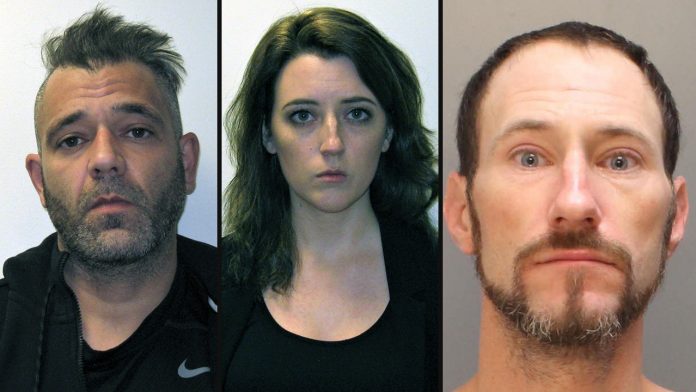 Kate McClure, one of the three people who were involved in the viral story of a homeless man, recorded phone conversations with her then boyfriend to show that she was not part of the scam.

In the recording, which was played Monday on the Good Morning America show, McClure tells Mark D’Amico, who was her boyfriend at the time, that he started the whole thing. In the recording, she is also heard saying that she had no part in any of this.

The recording comes just days after the three were charged with theft by deception and conspiracy. The Burlington County Prosecutor’s Office said at the time that the campaign was based on a lie.

Johnny Bobbitt and the couple went viral when the story of what he had done surfaced. Mr. Bobbitt, who was homeless when the story went viral, helped Ms. McClure by giving her his last $20.

The couple later set up a GoFundMe campaign to help Mr. Bobbitt. The campaign was a massive success, receiving thousands of donations from people. The couple raised about $400,000, which they said would be used for a lawyer and a financial adviser for him.

The three made television appearances for their story. But they were back on the news months later after Mr. Bobbitt decided to take legal action against them. He accused the couple of using the funds to live a lifestyle they couldn’t afford. Mr. D’Amico later responded to that by saying that Mr. Bobbitt was using money on drugs.

The story doesn’t end there though, the prosecutor’s office said a few days ago that this was all a plan. The picture that went viral during the story was also said to be staged. Prosecutors said the money was quickly gone and that the couple had spent some of it on vacations, gambling and a new car.

Reports say the couple’s relationship with Mr. Bobbitt went bad and that things had changed by the summer. Bobbitt was allowed to park his vehicle in their property but it was later reported that he had been told to leave. Reports later revealed that Mr. Bobbitt was homeless again.

Bobbitt decided to take legal action a few months back, accusing the couple of spending the money they had raised for him. Prosecutors then launched an investigation and found that it was all a plan.

McClure and D’Amico were in custody but they were released shortly after. The two ended their relationship and the recordings showed that it was not going well. The attorney representing Ms. McClure has said that her ex boyfriend was behind the plan.

The prosecutor has said that authorities have several messages in which it can be seen that she was part of the plan. Text messages read by authorities show that her mother and friend warned her that the plan could get her in trouble.

GoFundMe, the fundraising site that the couple used to receive donations, has said that it will return the money to those who contributed in the campaign, which saw more than 10,000 donations from people around the world.