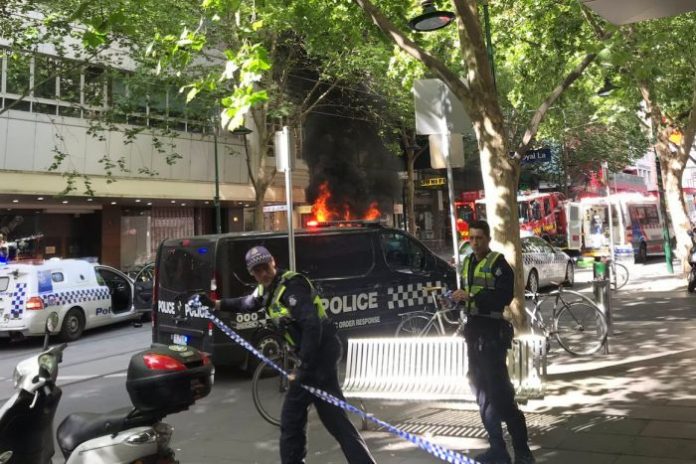 Police have killed a man who set a car on fire and then began stabbing people in the Australian city of Melbourne. The attacker was taken to the hospital but later died.

Authorities say the man stabbed three people, one fatally, and then confronted officers. The incident happened in a busy street and police responded to the attack by firing at him. He was taken into custody and was in critical condition when he arrived to the hospital.

Authorities have not revealed the name of the attacker but have confirmed that the other two people that suffered injuries in the attack are not in critical condition. Victoria Police Chief Graham Ashton said that they didn’t believe this was an ongoing threat but that they are treating it as a terrorism incident.

Authorities have confirmed that the man is from Somalia and that he was known by local police and intelligence. Videos shown by several news channels and sites showed a man going after two police officers. The man is seen attacking one of the police officers before he is shot.

The incident began after authorities were called over a car that was on fire near Bourke Street. The reports were made at around 16: 20 local time and the area was busy at the time.

Videos showed the car on fire and authorities later discovered that the vehicle had gas cylinders. Authorities said the car did not explode. A police official said during a news conference that the officers were confronted by a male with a knife and threatening them.

The official added that people nearby told the officers that others had been stabbed. The suspect is seen confronting the two police officers before one of them shoots him. Reports say people were injured close to the area where the car was set on fire.

Victoria Police said a 58-year-old and 26-year-old were taken to a hospital. Reports say a police officer was also treated on the scene.

It is not the first time that this area sees a deadly incident. Last year, there was an attack on the same street. The incident comes just hours after the trial. James Cargasoulas is accused of driving his car into pedestrians. The incident left six people dead and many more injured.

Last year, authorities arrested a man suspected of planning a New Year’s Eve attack in Melbourne. Authorities believe the man was planning to use an automatic rifle during the event. Police said the man is a 20-year-old citizen with Somalian parents. He was detained during a raid by authorities.

Police claim he got an online book produced by Al-Qaeda on how to commit terrorist attacks and use weapons. He was arrested before he could purchase the weapon. A police official confirmed that the man had been on their radar since the beginning of 2017. Police believe he was acting alone. They said at the time that they were still investigating where he got the idea from.