NFL Week 12 did not disappoint, with several teams saving their season with huge wins. Here are the results for Week 12, which ends later tonight with the game between the Texans and Titans. 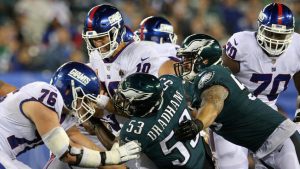 The Colts winning streak continues after a comeback victory against the Dolphins. Indianapolis has now won five straight games while Miami has dropped its last two.

The Broncos stopped the Steelers in the end zone with an interception late in the game. The win puts the Broncos at 5 – 6 in the season. The Steelers remain leaders in the AFC North with a 7 – 3 – 1 record.

The Vikings remain in second place in the NFC North following a win over the Packers. Green Bay has now dropped its last two games, putting them in serious danger of missing the playoffs.

The Patriots were coming off a surprising loss against the Titans but the Jets could not do the same. New England improved to 8 – 3 in the season while the Jets dropped to 3 – 8, which leaves them last in the AFC East.

The Browns are now on a two game winning streak, something that had not happened in the last four seasons. Cleveland took control of the game early, putting up one of its best games of the season. The Bengals have dropped three straight games and are now in third in the AFC North. The Browns improved to 4 – 6 – 1 in the season.

The Buccaneers snapped their losing streak with a big win over the 49ers. Tampa Bay improved to 4 – 7 in the season while the 49ers dropped to 2 – 9.

The Ravens continue their winning streak with Jackson as quarterback. Baltimore has won its last two games. The Raiders dropped to 2 – 9 in the season.

Seattle made a late comeback against the Panthers and took the W. The Seahawks have now won two straight games while the Panthers have dropped the last three.

The Jaguars disappointing season continues after a 24 – 21 loss against the Bills. Jacksonville has dropped its last seven games after starting the season at 3 -1. The Bills improved to 4 – 7 in the season.

The Saints continued their impressive run in a 31 – 17 victory. New Orleans has now won its last ten games, putting them four games ahead of the Panthers in the NFC South. The Falcons dropped to 4 – 7 in the season.

The Cowboys took the lead in the NFC East after a close victory against the Redskins. Washington came in with a new starting quarterback after Alex Smith suffered a season ending leg injury. Dallas has won three straight while Washington has dropped the last two games.

The Bears took a two game lead in the NFC North following a big win over division rival Lions. Chicago has now won five straight games while Detroit dropped to 4 – 7 in the season.