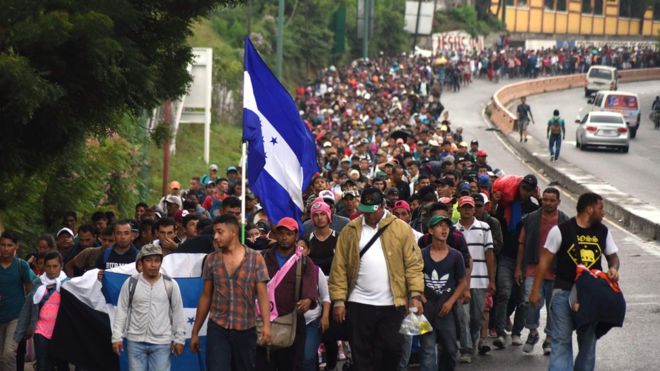 The US closed one of its busiest border crossings with Mexico earlier today to increase security. The border crossing was temporarily closed after a migrant caravan reached towns in the north of Mexico.

The area was temporarily closed to install new wire topped barriers. Half of the pedestrian crossings as well as the northbound traffic were closed at the San Ysidro border point. In recent days, hundreds of people have reached the city of Tijuana.

Hundreds more are said to be making their way to the city. The arrival of part of the migrant caravan has drawn protests from residents in the city of Tijuana.

Hundreds have arrived but Mayor Juan Manuel Gastelum said a few days ago that 10,000 more could arrive to the city in the next few weeks. He warned that the city was not prepared to take in this amount of people.

US Customs and Border Protection has reopened many of the lanes at the border point. Department of Homeland Security officials said they received information about possible attempts of people trying to make it into the US illegally. The officials added that they closed part of the border point for three hours to bring new security measures.

On November 14, hundreds of people reached the city of Tijuana. The group arrived shortly after another small group had entered the city. The second group that arrived to the city was mostly of LGBT migrants. The group separated from the migrant caravan weeks back because they said they were being discriminated by travelers and residents.

The migrant caravan is mostly of people from Guatemala, Honduras and El Salvador. Many of them say they are escaping violence, crime and poverty. US President Donald Trump said last month that the US would start cutting foreign aid to those countries. The announcement was made when the caravan was reaching Mexico.

Hundreds of people are now in the city of Tijuana and many are said to be planning on requesting asylum once they reach the US. The US has said that people will first have to request asylum in Mexico before making the request in the US.

Many Tijuana residents are not happy with the arrival of the migrant caravan since they say the US might be forced to close the border crossing. One resident told the AFP news agency that most of them depend on business from people coming and going across the two countries.

The protests were not all against the migrant caravan. A group of supporters also took the streets to show their support for the people that have arrived in recent days.