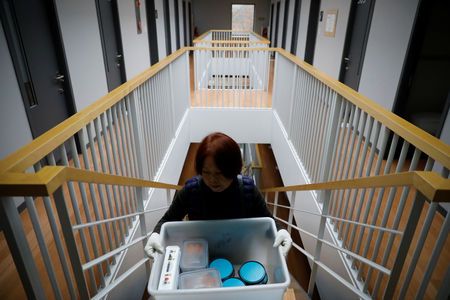 No one thinks about going to prison but there is one place that has become quite popular for offering the conditions of one. This prison themed hotel is located in South Korea and it has quickly caught the attention of residents, who have decided to take a break from work and see what it has to offer.

The hotel, which opened in 2013, is located in Hongcheon and it mostly sees workers and students. In the last five years, more than 2,000 people have decided to reserve a spot in the prison themed hotel.

Hotel Has Rules and Limited Menu

Those who reserve a spot in the hotel are given a blue prison uniform, a pen, notebook and yoga mat. The room is exactly like a prison cell, there is a little place to sleep and a toilet. The menu isn’t as bad as a prison but there isn’t much to pick from. It includes foods such as steamed sweet potato and rice.

The hotel sees many office workers and students who want to take a break and get rid of stress. The idea actually started off a man who was working a lot during the week. Co-founder Noh Ji-Hyang said the prison idea came because of her husband, who would often work 100 hours a week.

The Idea Began When ..

She said it all began when he said that he would rather go into solitary confinement for seven days to feel much better and rest. Park Hye-ri, an office worker, said the prison gives him a sense of freedom. He paid $90 to reserve a stay for one day at the hotel. Park explained that he was too busy and that he shouldn’t be at the hotel but that he decided to take a pause and go for a better life.

Many South Koreans work a lot during the week and this has led to stress and some times suicide. The problem has been a big topic in the last few years and the government has recently raised the salaries and placed a limit on how many hours people can work during the week. The current cap is at 52 hours but the previous cap was more than 60.