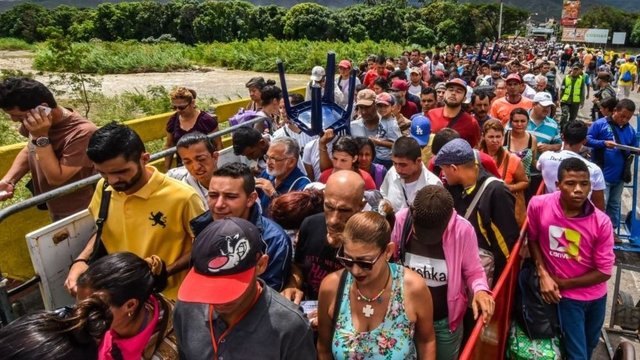 Venezuela continues to lose its population at a rapid pace, the United Nations has said. The organization announced that about three million people have fled the country since 2015.

The numbers mean that about one person of every 12 have left the country in the last three years. William Spindler, High Commissioner for refugees (UNHCR), said the rate has increased in the last six months.

Venezuela is currently seeing record levels of inflation and shortages. The situation in the South American country has sent millions to nearby countries, including Colombia and Chile.

Estimates say about one million Venezuelans are now in Colombia. Thousands more arrive each day and the Colombian government estimates that four million could be living in the country by 2021.

Maduro and several government officials have denied that people are leaving the country by thousands. Vice President Delcy Rodriguez recently denied that the country is facing a migration crisis. She went on to add that migration levels are normal. Diosdado Cabello recently suggested that the migrant crisis is staged.

The numbers are far more than what the organization estimated last month. The UN said at the time that nearly two million people had left the country since 2015. The UNHCR added that about 5,000 people were leaving the country every day.

A spokesman for the refugee agency said to AFP that 1.9 million people had left in the last three years. Previous reports had mentioned that 1.6 million people had left. A large percentage of the people are leaving to South American countries but the US and Spain are also among those who have received thousands of Venezuelans.

Venezuela’s economic crisis began four years ago with the drop of oil prices. Since then, the Venezuelan government has made changes that experts say have only made things worse. The most recent change was the removal of five zeroes from the currency, which continues to lose value almost every day.

The Venezuelan government blames the economic crisis on the sanctions from Europe and the US. Earlier this month, US President Donald Trump signed a sanction order targeting the country’s gold exports.