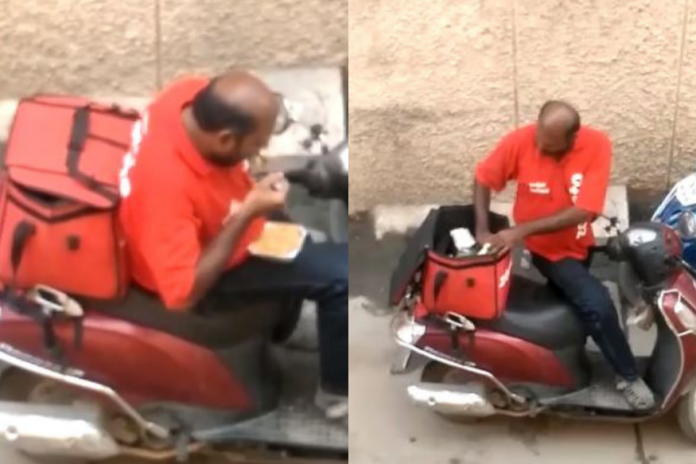 In the video, which is over two minutes long, he eats from a food order and closes it back. He then takes out another food container and starts eating from that one as well. The video immediately went viral, with many criticizing his decision to eat and then deliver them.

The delivery company learned about the video and released a statement saying that it took food tampering very seriously. The statement adds that the company spoke to him and that they decided to take him off the platform.

The video and firing of the man has sparked a huge debate on the delivery industry in the country. The former Zomato employee, who was at first criticized for eating the food, is now receiving some support on social media.

The man has been removed from the platform and many are now pointing out the problems with the service in India. Several social media users posted that these employees are working long hours with a poor pay.

One user explained that this sort of thing happens when employees don’t get paid enough to go buy a meal during breaks. She suggested that the services should hand out one or two meals for their employees every day.

The BBC has been keeping up with the video and the comments from the people who believe that things should change after what happened. The news site spoke to several delivery people and one of them explained that they used to get paid a lot more. That delivery person said they used to receive 60 rupees per delivery but that was dropped to 40 rupees. That person added that the delivery company is now planning to make it 30 rupees.

Another person told the news site that the company does not offer insurance if you get injured while working. That person said the companies should think about insurance policies.

In India, the second most populous country in the world, people have a difficult time finding jobs since millions and millions join the workforce every year. Many are now turning to food delivery services but some complain that they don’t get paid enough.

Companies such as Zomato have said that they offer insurance for their employees. The BBC spoke to a Zomato representative and that person said that employees choose to login when they want to work and are free to go offline and come back when they want.

Zomato has confirmed the removal of the man from the platform and while many are showing support for him, a lot agree that this is unacceptable and that the company’s decision is the correct one.