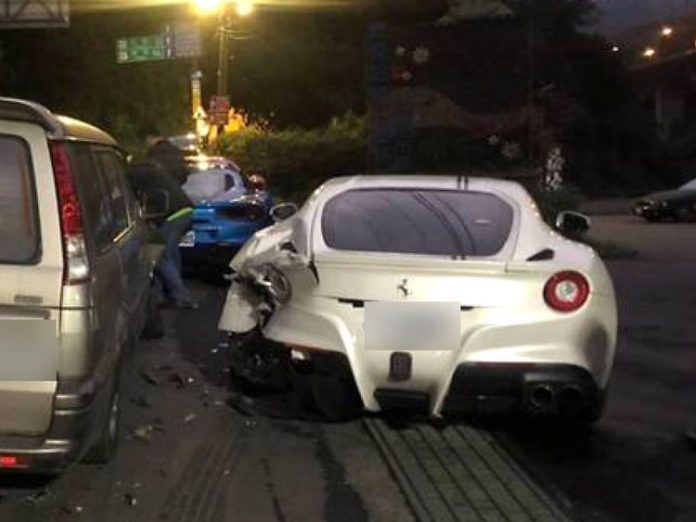 The story of the man quickly spread on social media and news sites. Many have decided to support him by donating money. Lin Chin-hsiang got the shock of his life when he learned that the repairs would cost an insane amount of money.

The BBC reports that the man dropped out of college a few months ago to help at his family’s shop. He also has a job at a restaurant, where he works at night.

On Sunday, he returned home and found out that his mother was not feeling well. He decided to complete the deliveries himself. The deliveries went well but he was exhausted from working at the restaurant and then having to deliver.

At around 5:40 AM, he fell asleep at the wheel and crashed into not one but three Ferraris. The luxury cars were brought to the area by a group of friends who had decided to go on a drive around the city. The accident happened when the drivers were standing near their cars but no one was injured.

Authorities confirmed that the man did not have alcohol in his system and that he has a clean driving record. Local media learned of the accident and contacted several repair shops to know an estimate on the repairs. The estimated bill is almost $400,000, an amount that the man and his family do not have.

The news of the accident have caught the attention of many residents. Some have decided to contact authorities to help pay the huge bill. Others have tried to help pay his legal fees. Some residents have also visited the family’s shop to give them support.

The man recently said that he is grateful to everyone that has offered to help. He added that some people have come from central Taiwan to ask where they can donate money.

The story has also been a big topic on social media, where many have asked for the car owners to forgive the man and not make him pay for the repairs. One owner has already said that he worked hard to buy the luxury car and that he would like to be compensated.

The man has said that the owners have been kind and that they have told him he doesn’t have to pay all of the amount at once. They have suggested he could pay installments while they talk to their insurance companies on what is going to be covered.

Local authorities have asked people to make donations to an official account. Around $24,000 have been raised for the repairs so far. The biggest donation was nearly $6,500. The BBC reports that it would take the man around 28 years to pay for all of the repairs since the monthly salary is just over $1,100.

The man and family do not have the amount but he has made it clear that he plans to pay for all the repairs, even if it will take him years. Reports say the insurance policy he had only covered injuries and not damages to vehicles. The college he dropped out of has heard of his story and invited him to return. He dropped out earlier this year to work at the shop with his family.