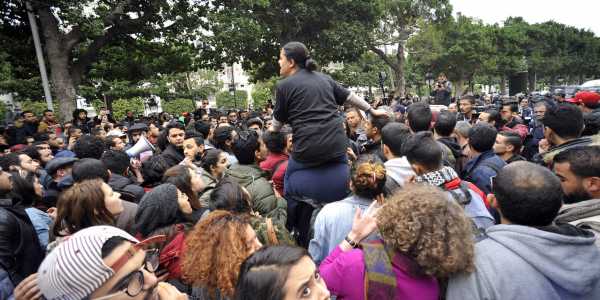 Clashes were reported in cities such as Kasserine, where police had to respond with tear gas. During the clashes, protesters threw rocks and other items at police. It was the second day of protests in that city.

The town of Jbeniana also saw clashes between authorities and protesters. The clashes left at least one person injured. Reports have said that the person injured in the clashes is a police officer.

National security spokesman Walid Hkima confirmed that five people had been arrested in the town of Tebourba. Earlier this year, that same town saw clashes over price increases in the country. The protests went on for several days.

The protests were sparked by the death of a journalist, who set himself on fire on Monday. The incident happened in Kasserine, where protests began shortly after. The journalist released a video just hours before setting himself on fire.

Many of the clashes have been reported in that city. The interior ministry recently confirmed that one person had been arrested for allegedly sparking the protest. In the protest, many people took the streets to show their anger for the current conditions in the country. Several protesters decided to burn tires and block roads around the city.

The interior ministry spokesman confirmed that thirteen people had been arrested in that city. The spokesman revealed that the people were arrested over acts of destruction during the protests.

It is the second self-immolation that takes place in recent years. Back in 2010, Mohammed Bouazizi, who was a street vendor, decided to set himself on fire. His death sparked protests across the country. Kasserine was among the cities that took the streets shortly after his death. In the protests, several people lost their lives.

The unrest across Tunisia forced Zine El Abidine Ben Ali to step down. He was in power from 1989 to 2011. The former president fled to Saudi Arabia during the protests, which went on for days.

The country has had other leaders since but the conditions continue to be bad for some of the population. The country continues to have a high unemployment rate as well as high levels of inflation. A presidential election is scheduled for 2019.

Officials recently said that the arrests were now at 18. Thirteen arrests have been reported for Kasserine while the other five took place in the town of Tebourba. ShemsFM Radio recently reported that military had been deployed to help police and secure government buildings.

In the capital Tunis, people took the streets to protest on the economic situation. Many of them gathered on the main road of the city. No arrests have been reported in that city.

A Kasserine official recently said that an investigation on the journalist’s death will be opened. He said it will be over failure to assist a person in danger. He also confirmed that a suspect has been arrested.

The journalist was taken to a hospital but he died shortly after setting himself on fire. His funeral was on Tuesday and many people took the streets after it happened. The National Union of Tunisian Journalist said he died protesting the difficult conditions. They said they are considering a strike.