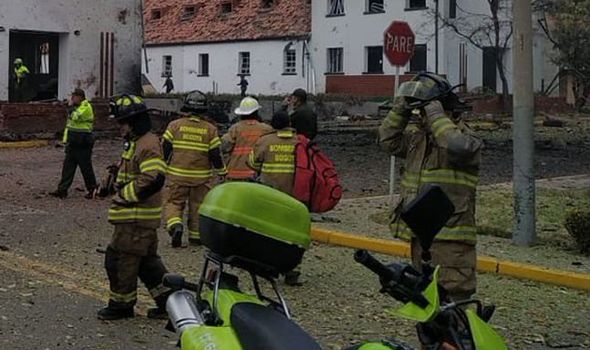 A car bomb explosion has killed several people in Bogota, the defence ministry has said. The explosion happened near a school for police cadets. Reports say more than 50 people were injured by the blast, which happened at around 9:30 local time.

Witnesses have told the media that the vehicle entered the compound and accelerated when it was stopped at a checkpoint by guards. The car hit a wall and then exploded. The news of the explosion quickly brought many family members and friends of the police cadets to the gates. They stood at the entrance to get more information.

Reports say an Ecuadorian and a Panamanian citizen were injured by the explosion. Authorities have confirmed the deaths of at least nine people. Colombian Prosecutor General Nestor Humberto Martinez named the man behind the wheel as Jose Aldemar Rojas Rodriguez. He said the vehicle used in the attack was a Nissan Patrol van. He added that the vehicle was carrying around 176 pounds of explosives.

Colombian President Ivan Duque was in another part of Colombia but tweeted shortly after the explosion that he would return to the capital. RCN Radio posted a 19 second video shortly after the incident. The video shows the car completely destroyed and the damage that it left in the area.

The incident has left the population shocked since nothing like this had happened in years. Local media reports that the last explosion happened nine years ago.

The deal allowed the former rebel group to turn into a political party. They were planning to participate in the most recent presidential election but its candidate withdrew shortly after. His decision came over health problems. The party’s leader recently condemned the attack on social media.

FARC was once the largest group in the country but the deal left the ELN group as the biggest. The government and ELN have had talks but no deal has been agreed to so far. The two sides have only agreed to a ceasefire in recent years.

FARC’s party leader wrote that the attack was a plan to ruin the chances of a peace deal between the government and ELN, which is said to have at least 3,000 members. Juan Manuel Santos term ended last year and new president Ivan Duque has not restarted the talks.