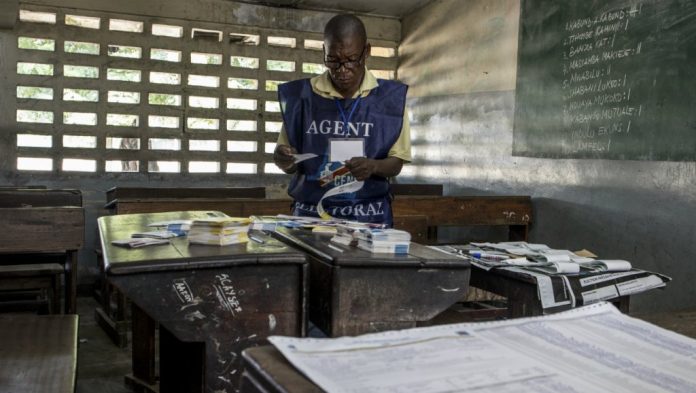 Police are now at the electoral commission headquarters in Kinshasa to guard the building. Authorities were sent there amid fears that the result could cause disputes. The presidential election took place a few days ago but there have already been accusations of fraud.

The results could be announced later today after a short delay earlier this week. Reports say the commission met all night and morning. The election was held on December 30 and the results were expected to be announced on January 6. The presidential election, which was delayed by a week in December, has been surrounded by controversy, especially after several cities were left out.

Days before the election was held, the electoral commission announced that some cities had been left out due to the Ebola outbreak and insecurity. The announcement sparked anger among the population of those cities. Many took the streets to protest and in some places, the situation got out of control. Police accused protesters of breaking into an Ebola response center.

Joseph Kabila’s term came to an end in 2016 but he has remained in power over delays. It’s been two years since the end of his term but the electoral commission said during that time that they needed a delay to register voters. They also explained that there wasn’t enough money to hold an election.

Mr. Kabila has been in power for 18 years, winning two elections in 2006 and 2011. The December 30 election was meant to be the country’s first democratic transfer since its independence but some fear that things could get out of control after the results are announced.

The country was left without internet and SMS services shortly after the election. The opposition accused the government of trying to hide the results. Government officials explained that the services had been shut down to prevent any fake results from surfacing.

The capital has not seen any clashes but some fear that they could happen after what took place last month. Some Kinshasa residents decided not to take their kids to school.

The president of the largest opposition party in the country is expected to win, according to his camp. They said they met with representatives of the president to ensure a peaceful transfer of power. The president’s camp has denied that there was a meeting between the two sides.

Supporters of another presidential candidate think Mr. Kabila may be looking to negotiate if his candidate loses the election. Yesterday, several candidates released a statement saying that the results of the election cannot be negotiated.

The election took place last month but it continues to be surrounded by questions since reports say more than a million voters were left out. It is unclear if a vote will take place in those cities.