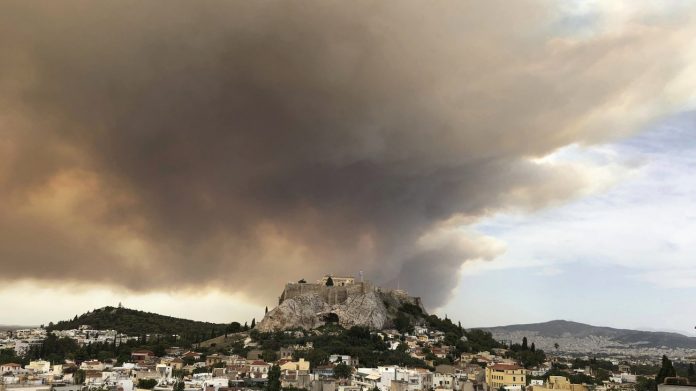 Three migrant fishermen have been awarded the Greek citizenship after helping during a wildfire near Athens in July. The three migrants, two Egyptians and an Albanian, were invited to a ceremony with the president.

During the ceremony, Greek President Prokopis Pavlopoulos spoke about the migrants and their heroic actions. He thanked the three for showing solidarity and humanity. The three helped save many lives during the devastating fire last year.

The wildfire killed at least 90 people, with witnesses saying that many were trapped near the coast. Reports said many were forced to jump into the sea during the fire, which quickly spread across several towns.

The migrants each met the president during the ceremony, which was announced to grant all three the Greek citizenship. The government did not reveal how many people they saved during the wildfire but they said they had rescued dozens of their compatriots.

One of the migrants spoke to the Athens News Agency and said that in such emergencies, there is no religion, there is no white and black. He added that when someone sees something like this happening, he must go in there and even give his life to help save people.

Greece has taken in many migrants in recent years. The European nation was in the middle of the migrant crisis back in 2015 and 2016. More than a million migrants entered Europe during those years and many of them came in through Greece. The numbers later dropped with the deal between EU and Turkey.

The deadly wildfire last year has brought criticism against the government and authorities. Reports say authorities set up routes that led to the areas where the fire was close. Authorities have also been criticized for not having an alert system or quick response to evacuate people out of the area.

It is not the first time that a government decides to grant citizenship to a migrant over a heroic action. A few months ago, a Malian migrant went viral after he was seen climbing several floors of an apartment building to help save a child. The child was barely hanging on from the balcony and the migrant quickly climbed the floors by grabbing onto the balconies.

The man reached the floor and helped put the child back in. He was later given the nickname Malian Spiderman. The French government found out about the video and contacted the man. He was later granted the French citizenship during a ceremony. He was also given a job with emergency teams in the city.

The man reached Europe the year before but had recently entered France. He told the media that he spotted people watching the top of the building and decided to help. The child was left alone in the apartment, according to reports. His mother was out of the city and his father had gone to the supermarket but later got distracted by the Pokemon Go mobile game.

In September, the father of the child was given a three month suspended sentence. The court also ordered him to take a course to improve his parental skills.