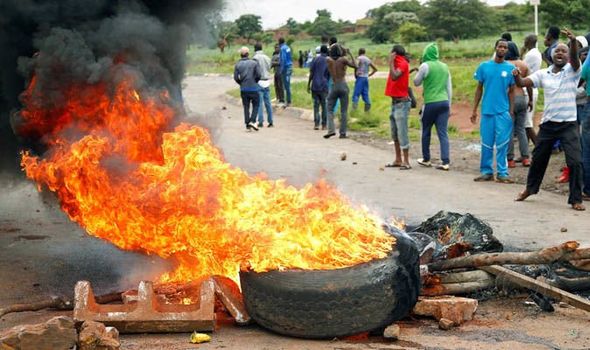 Zimbabwe has blocked popular social media sites such as Facebook, WhatsApp and Twitter. The block comes during a time in which security forces have taken the streets to crack down on protests.

Local human rights groups accuse security forces of torturing and using excessive force against protesters. They say at least 12 people have been killed in the last few days. The Zimbabwe Human Rights NGO Forum accused authorities of shutting off the internet to hide human rights violations.

The protests have turned violent and in some towns and cities there have been reports of looting. Businesses and schools in these areas have been forced to close. The UN has asked the government to stop the use of excessive force.

The protests began on Monday when the population learned that there was a rise in the price of fuel. The government has accused the opposition for the protests, which have continued since Monday.

President Emmerson Mnangagwa explained that the rise was done to combat the shortages caused by illegal trading and the increase in fuel use. The decision has sparked anger among the population since this means more money to spend. The rise also had an effect on public transportation, with fares on buses and other transportation going up.

Zimbabwe’s economy continues to struggle, despite the recent changes. A lot of the population believes that the president has not been able to solve the big problem that has followed Zimbabwe for years.

The fuel increase is a lot for the majority of the population. Fuel prices went from $1.24 a liter to $3.31. Diesel went from $1.36 to $3.11. The rise has made Zimbabwe’s fuel the most expensive in the world, according to GlobalPetrolPrices.com.

The sudden decision to shut down the internet and social media has also sparked anger among the population. Econet has already said that it was ordered to block access. Reports revealed that internet access had been shut down earlier this week. The internet was restored later but it was shut down again earlier today. Reports say the internet has come back in some areas.

The return of the internet does not mean that social media sites are back. WhatsApp and other popular apps of communication remain blocked in the country.

Zimbabwe is the second country in recent days to shut down its internet. Just a few days ago, the Democratic Republic of Congo was without internet over its presidential election. The election took place on December 30 but the internet was shut down shortly after. Government officials said the shut down was done to stop the spread of false results about the elections.