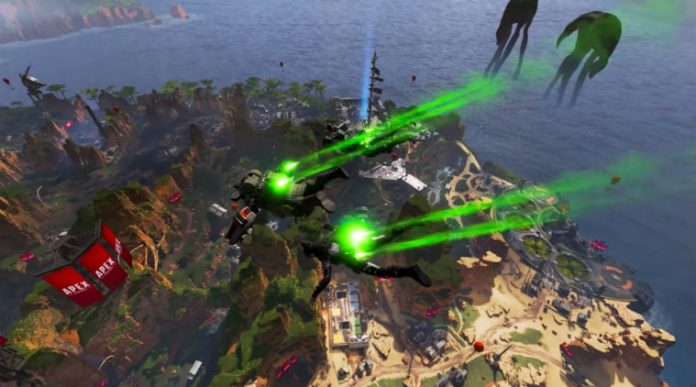 Apex Legends is one of the most popular battle royale games but some YouTubers have ran into some problems with their videos. The copyright strike issues have brought some complaints from YouTubers and the game’s composer has now clarified what is causing the problem.

The copyright issues are happening over the game’s opening music. The music comes on when players jump out of their ship and are on their way to a landing spot. It is 30 seconds long but some YouTubers have complained that their videos are now getting claimed over that music.

YouTuber DSPGaming was one of the people who took social media to complain about it. In his Twitter post, the YouTuber says that the brainless idiots at EA loaded the music into YouTube’s content ID system. He adds that all of his videos are now getting claimed.

The YouTuber made the post yesterday and he received a response from the game’s composer today. Stephen Barton, who created the music for the popular battle royale game, said through his post that it is being rectified and that this was unintended. In the post, he also mentions that this was because of an automation process.

It is currently unknown how many videos have been claimed over this issue. The solution to this issue right now is to turn off all in-game music and wait for a new response from the composer or the game developers.

Apex Legends, a game from Respawn Entertainment and EA, was released just weeks ago for the PC, Xbox One and PlayStation 4. The free-to-play title was announced out of nowhere but quickly became major competition for Fortnite.

The battle royale game had an amazing first week, reaching a whopping 25 million players. The popularity has continued and the game is rumored to get its first Battle Pass some time next month. The Battle Pass is rumored to include cosmetics and other unlockables for players.

Apex Legends is free to play, which means you can download the game at no cost. The game does have a similar system to Fortnite, where you can buy cool skins and cosmetics through the item shop. The game currently has eight Legends, which are characters with special skills and abilities. Two of the characters are locked but they can be unlocked by simply playing the game and earning the amount needed for each. They can also be unlocked through an in-game purchase.