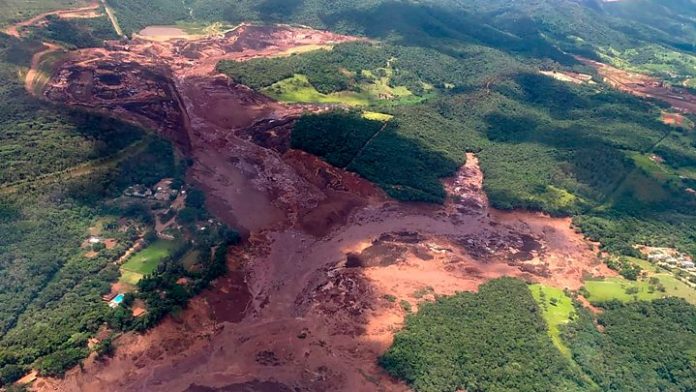 New images and videos have surfaced of the moment that the dam, which was located in the city of Brumadinho, collapsed and swept away everything in its path. The iron ore mine owned by the Vale company sent a mudslide into workers and parts of the city.

The images, obtained by the Bandeirantes TV station, show the moment when the mud starts to enter parts of the work area. The video begins with the sludge moving in from the left side. A pickup truck is seen driving away from the sludge and another vehicle is also seen doing the same seconds later.

The two vehicles drive towards the same area but the sludge also comes in from the right side. It is unclear what happened to the people that were driving those vehicles. Officials have confirmed that the collapse swept away the cafeteria, where workers were eating lunch. A building is seen close the area where the two vehicles drive to but it is not known if that was the cafeteria.

Authorities have launched an investigation into the deadly collapse. Officials have confirmed the deaths of many people and also revealed that there are hundreds still missing.

Authorities have arrested five people over the collapse. Prosecutors have confirmed that three of the people arrested are Vale officials. The incident is the second of the company in the last three years.

A state official spoke to Reuters and said that evidence suggested that the collapse was caused by something known as liquefaction. The process the official mentioned happens when a solid material loses strength and becomes liquid.

Vale was involved in a similar incident back in November 2015. In that incident, the dam, owned by Vale and another company, collapsed. The incident left many people dead and hundreds without homes.

Vale was taken to court by the government for that incident, which is considered one of the worst environmental disasters of the South American nation. The company reached a settlement worth billions of dollars. The companies said at the time that the dam had been inspected months before.

Vale has said that the cause of the collapse is still being investigated. The company has added that the instruments used to determine if there is anything wrong had shown that there was no problem.

The collapse led to a search and rescue operation but rescue teams did not find survivors in many of their attempts. The disaster buried many parts of the area and teams have had a difficult time accessing some of them.

Brazil is home to many dams and Vale is currently the world’s biggest producer of nickel and iron ore. Organizations are now urging the government to take measures to make sure this does not happen again.

The incident has sparked anger among the population since it is not the first disaster of Vale in recent years. Vale, the fourth largest mining company in the world, is now under pressure after its second incident.