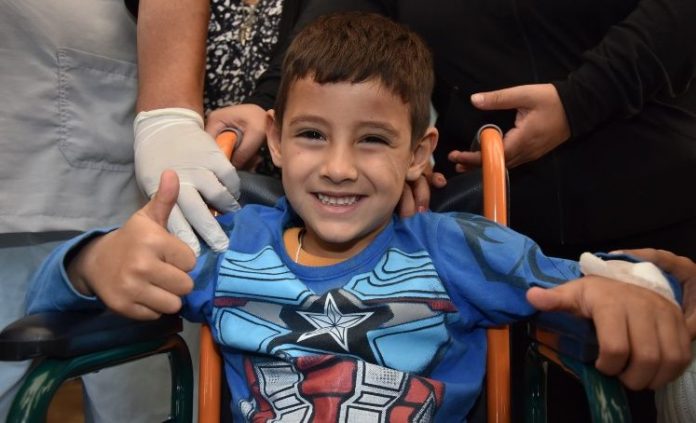 A five-year-old boy who was lost for almost a day in a desert has been rescued. The boy got lost in an Argentinian mountain that is home to many dangerous animals, including snakes and scorpions.

Benjamin Sanchez was lost in the area for 22 hours. He got lost when he tried to play hide-and-seek during a visit to El Salado. The area, which is located in the San Juan Province, Argentina, is partially desert with hills and extreme conditions.

The boy spoke to the Clarin newspaper after his rescue and said that his mother was chasing him and he started to run. He said he could hear her at first but then got lost. He explained that he leaned on a rock to call her but she couldn’t hear him.

The boy’s mother, Andrea Quiroga, chased after him but she explained that it was so quiet that she could hear him cry but could not see him. She had no choice but to look for help.

Benjamin ended up walking around the area for 13 miles. He walked through many dangerous places of the region, including hills and forests. The region is home to many dangerous animals but Benjamin walked for almost a day and was not injured.

He was dressed in sneakers, t-shirt and pants when he got lost from his mother. The clothing was perfect for a visit to the region during the day but the problem was at night, where temperature usually gets much colder.

Benjamin’s disappearance caught the attention of news agencies across the country. Rescue teams quickly began the search for the boy, who explained that he got cold and scared.

Benjamin did find some water from a stream and tried to eat some plants. Benjamin’s mother did not leave the area where she last saw him. Rescue teams used a drone, helicopter, motorcycles and horses to look around the area. 300 volunteers participated in the search for the boy.

The boy was found in a swampy area of the region. His mother said that she was desperate and that she had started thinking the worst. The boy was initially spotted at 4 PM by Alberto Ontiveros, who was part of a team searching with motorcycles. The team followed the tracks left by his sneakers and he said that he alerted the helicopter after seeing him.

He was reached by Juan Reynoso, who was also searching but with a horse. He rode through mud to offer him water. Mr. Reynoso explained that the area is a swamp with a lot of mud.

Ontiveros then returned after alerting the helicopter and got to the boy. He said that the boy was a little thirsty and tired. Benjamin was transported by helicopter to a hospital in the province of San Juan. Pictures taken after the rescue showed the boy being held in arms by one of the rescuers. The pictures show several members of the rescue team waving to a helicopter. The governor of the province recently confirmed that he visited the boy.