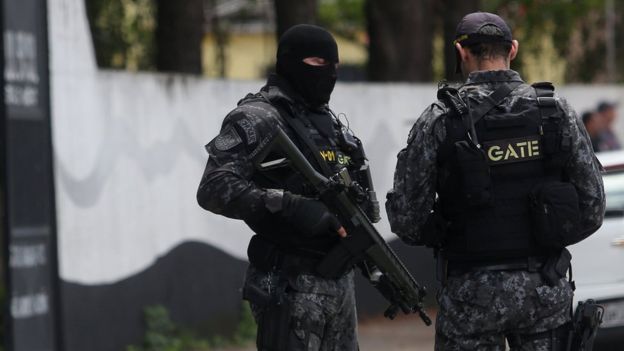 The two gunmen who entered a school in Suzano, Brazil and killed six students were former students, according to officials. The attack, which happened at about 9:30 local time, has left residents shocked since school shootings are not common in the South American country.

The gunmen entered the school wearing face masks and began firing at the students. They made their way to the language center area of the school before killing themselves in the hallway.

Authorities have confirmed that the attackers were aged 17 and 25. They have also confirmed the discovery of several other weapons, including a bow and arrow and an item they believe is an explosive. It is not yet known where they obtained the weapons.

Police are currently investigating why the two former students attacked the school. A video released hours ago shows a number of students running out the entrance of the school. The shooting, which happened at the Raul Brasil school, took place when there were only secondary students in the building.

The school has close to 1,000 students, including primary students. They are aged between six and eighteen. The school is also the home to a language center, which the attackers got to before killing themselves.

The attack began with the gunmen firing at a coordinator and another employee. The gunmen continued their attack, this time against the students. Some reports say five students were killed while others say the number was six. Several other students were injured in the attack.

One teacher told local media that she thought the sounds were bombs at first. She then realized they were gunshots and decided to stay in the classroom. She says she exited the classroom when police arrived.

Police got to the school eight minutes after the attack started. They did not confront the gunmen, who took their lives in one of the hallways of the school. Authorities have also confirmed the death of an owner of a nearby shop. The car of that person was stolen by the attackers. Authorities had previously mentioned the first incident but had just said the person was injured.

The most recent incident before the one on Wednesday took place in 2017. In that year, one teenage boy attacked a school. Authorities said at the time that the boy decided to attack because he had been bullied.

The deadliest school shooting in Brazil took place in 2011. In that incident, 12 students lost their lives after a gunman entered a school in Rio de Janeiro. The incident happened at an elementary school, which the attacker had attended from 1999 to 2002. Former schoolmates described him as strange and a reserved person who was constantly harassed by other students. In a video he recorded days before the shooting, the attacker stated that bullying was not the only reason he would die for.

Authorities continue to investigate yesterday’s incident but have confirmed that the two attackers were former pupils.