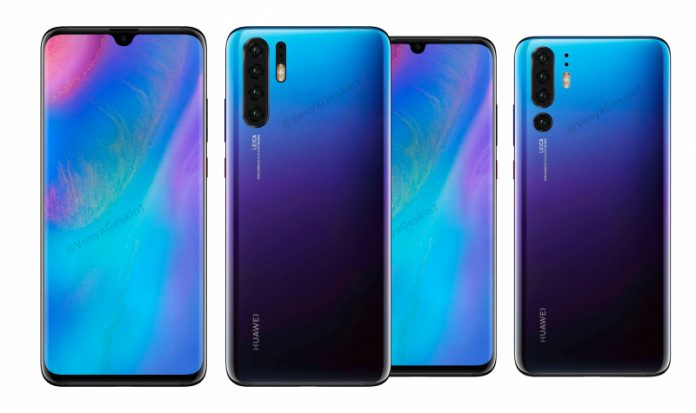 Huawei will be launching the latest versions of its P series, the P30, during an event tomorrow. The soon to be launched flagship has seen a ton of leaks during the last few weeks and all of the details about it will finally be confirmed on Tuesday.

The Huawei P30 launches will see at least two versions, the standard P30 and the P30 Pro. The P30 and P30 Pro have both appeared in leaks, especially the Pro variant. Here is all the information we have about the upcoming devices:

The P30 and P30 Pro have seen render images go online. The images show very interesting devices and some of the details confirm that the phones will be really good in the camera department.

The P30 Pro appears to have major features, including the 10x zoom that’s been rumored for a while now. The feature has been mentioned in several reports and it was pretty much confirmed when Amazon Italy made an accidental listing of this variant. The listing, which was spotted by several tech sites a few days ago, revealed the zoom as well as some of the specs and the price of the device.

The listing, which was removed shortly after, revealed that the phone will have a price of 1,024 euros. That is right along the prices of the competition, including the Galaxy S10, which was launched a few weeks back.

The phones have also appeared in the company’s official website for an event in Singapore. In the event, the company will give out a new watch as well as a speaker for those who purchase a P30 or P30 Pro.

Huawei was busy launching other smartphones today. The Chinese smartphone giant launched the newest members of the Enjoy series, the 9s and 9e. The two phones are said to be an exclusive for the Chinese market but the company often releases similar devices with different names. The Smart and Y series are some examples of that.

The Enjoy 9s, which falls in the midrange category, has a 6.21-inch display with a waterdrop notch. The notch contains an 8MP front camera. The phone is powered by a Kirin 710 processor with 4GB of RAM and 64GB or 128GB of storage. The most interesting part about the device is on the back, where a triple camera can be found. The back also has a fingerprint sensor, like most of the midrange releases from the company.

The Enjoy 9e is a more affordable version of the Enjoy 9s. The phones share a similar look but the 9e has a 6.09-inch display with the same waterdrop notch and the 8MP front camera. The back of the phone also has a fingerprint sensor but there are major differences on the camera department. The Enjoy 9e has a single 13MP camera with flash. The rest of its specs include a Helio A22 along with 3GB of RAM and 32GB of storage.