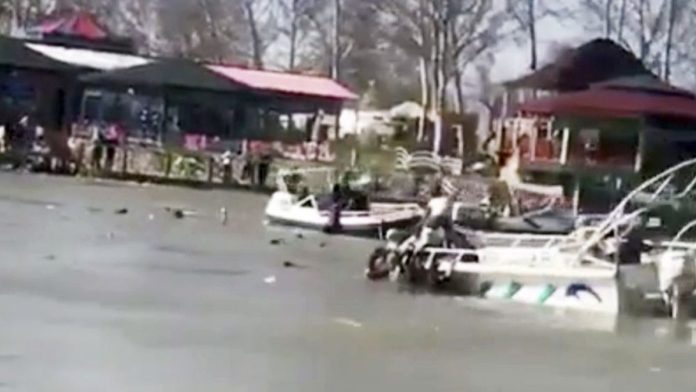 More than 70 people have lost their lives after a ferry sank in the Tigris river. The ferry was said to be on its way to a tourist island when the incident happened.

Videos taken by people on land show what appears to be part of the ferry being carried away by the river. Several people are seen swimming towards the sides of the river, where people were sitting down and watching. Small boats also appear to be helping rescue some of the people, who had no choice but to try to swim after the ferry sank.

The head of Mosul’s Civil Defense agency said that most of the passengers on the ferry could not swim. Reports suggest that almost 200 people were on the ferry at the time of the incident.

Authorities don’t know what caused the ferry to sink but Prime Minister Adel Abdul Mahdi has requested an investigation to find out what happened and see who is responsible. Health officials have confirmed the death of at least 72 people. 67 were rescued while 55 others are still missing.

Helicopters and ambulances are in the area to treat survivors and recover bodies. Videos taken by those nearby show that the river had a strong current at the time. One video appears to show the ferry being carried away while some survivors are swimming towards the sides.

Authorities had reportedly warned about the high water levels since the gates of the Mosul dam had been unlocked. Some have already accused the operator of the ferry of ignoring the warnings from authorities about the opening of the dam.

The ferry was reportedly heading to Umm Rabaen Island, a tourist attraction just a few miles from the city. People in the region are currently celebrating a new year festival and some of the passengers were said to be on their way to doing the same. CNN reports that 12 children lost their lives. Authorities are currently investigating but reports say that the ferry was over capacity when it started sinking.

The Tigris River, which flows through southeastern Turkey and Iraq, is an important route for many vessels. The river is controlled by a dam on Iraq’s side since it is prone to floods from snow melting on the Turkish side.